Paras Chabbra's girlfriend Akanksha Puri reacts on her link up with Sidharth Shukla. 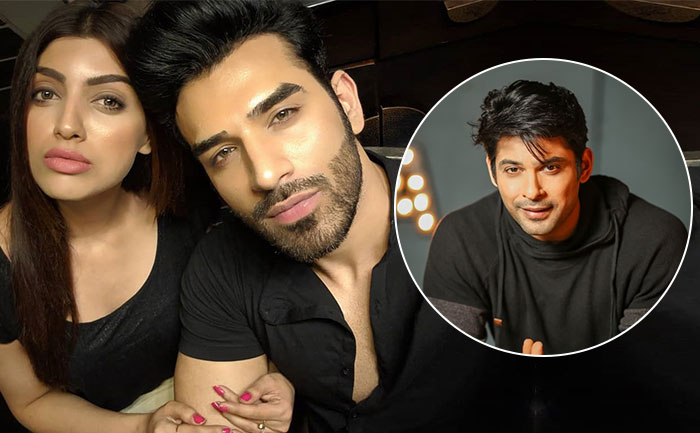 The new season of Bigg Boss is known for drama, controversies and link-up rumors. Especially, Sidharth Shukla who is known for his link-up rumors with a number of women. His link-ups have also raised a question on Shukla’s character. Shukla’s name was linked with Rashami Desai, Arti Singh, Shefali Jariwala and now it is Paras Chabbra’s present girlfriend Akanksha Puri.

During the BB Transport task, Shukla and Chabbra had a verbal spat that involved Paras’ girlfriend Akanksha Puri as well.

Well, that statement confused a lot of people and as we all know there have been rumors about Shukla and Akanksha being in a relationship.

While talking to SpotBoye, Akanksha spilled some beans on why Paras holds grudges against Shukla, she said, “I won’t deny that Paras holds a personal grudge against Sidharth aur woh nikal raha hai. Like you have heard link-up rumors about Sidharth and I, he also has heard them. Paras is not fond of Sidharth. You know when he was leaving for Bigg Boss 13, I told him that either you and Sidharth will become best friends or things will worsen between you two. Aur ab dosti hona to kahin se bhi nahin dikh raha.”

Happy Birthday love 😘You are the best thing that has happened to me, and I wish you all the happiness and success in life.You deserve it baby and I will make sure all your dreams come true.I m happy that you are sharing your special day with me.Thanks for everything you have done for me.Thanks for all the memories you’ve given to me. No matter how old we get, and how many more birthdays we celebrate, I will always be here for you. Happy Birthday.Love you loads @parasvchhabrra #happybirthday #birthday #birthdayboy #love #couple #couplegoals #luckyblack #vignahartaganesha #sonytv #parvati #raavan #king #goddess #paraschhabra #akankshapuri #instagram #instapic #instashot #ruthless #partners #akankshapuri #instagram #instapic #instashot #ruthless #partners #888 #insta #instagood #instapic #instafun #beauty #beinghappy #beingme #akankshapuri #😘