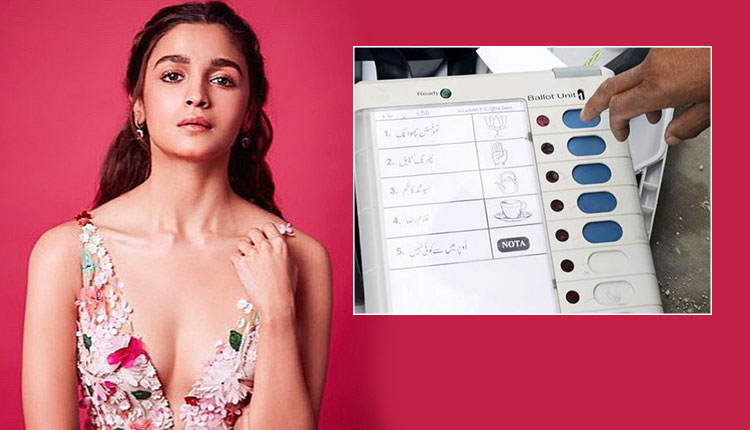 Bollywood actress Alia Bhatt, who had replied Indian Prime Minister Narendra Modi’s request of using their fundamental right of vote in 2019 Lok Sabha Election, recently revealed that she can not vote in the upcoming election. Yes, unlike her Kalank co-stars Varun Dhawan, Sonakshi Sinha, Aditya Roy Kapur, Alia Bhatt will not cast her vote in the upcoming election as she does not have Indian nationality/passport.

Yes, you read that right, in an interview with India Today, the Raazi actress has told that she can not vote. Alia Bhatt’s revelation comes almost a month after Prime Minister Narendra Modi urged celebrities to create awareness among common people in their own ways to cast their votes in the country’s election. Alia Bhatt On Battling Anxiety: I Feel Like Crying For No Reason And Then It Passes

Replying to PM Modi, Alia Bhatt had acceded his request and tweeted, “A vote is a nation’s voice. A nation’s choice. Use your voice. Make your choice. #Vote #Election2019.”

While promoting her upcoming film Kalank, Alia Bhatt told the news channel that she cannot vote. When the star cast was asked that now that the polling has begun how were they going to do their bit to elect the new government, Aditya Roy Kapur, Varun Dhawan and Sonakshi Sinha answered in unison, “By voting.”

Alia was then asked whether she was also going to cast her vote. To this, she replied, “I can’t vote.” On being asked if her “passport” was the issue, she nodded. For the unversed, Alia Bhatt doesn’t have an Indian passport as she is a British citizen and as is her mother Soni Razdan.

Aditya went on to say, “I have made a couple of please vote videos so I feel that’s the little bit I’ve done.” Alia also said, “I think everywhere we’ve been going, we’ve been all saying the same thing.”

Varun said, “I think we’ll all be voting. It’s important, I think, obviously in Mumbai, in Maharashtra, there’s some time for the elections to begin for us to go and vote and we’ll all be going and visiting and doing our duty in electing the govt officials we feel fit to come into power.”

Kalank is Scheduled to hit the theatres on Wednesday.

Nita Ambani Was Once Told She Could Never Conceive, This Is How She Dealt With It