Anushka Sharma flew to London to support her husband Virat Kohli and in meantime she learned some pottery work. 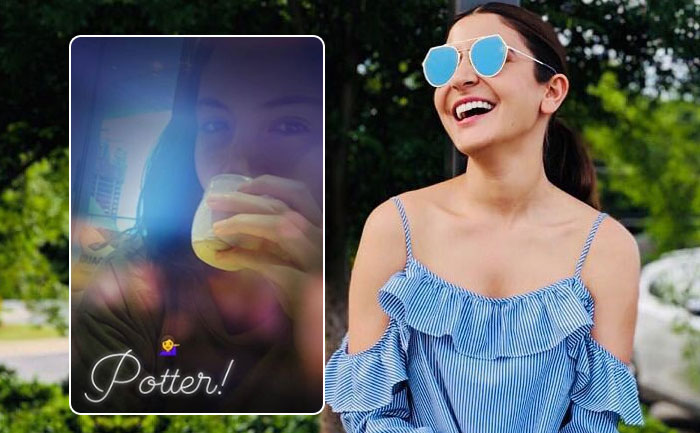 Today, she shared a picture of sipping coffee from her teacup. Anushka seems really proud of her work. Earlier pictures of her pottery class surfaced online. Here she can be seen clicking a selfie with her work.

The proud potter shared an Instagram story with a caption, “The joy of drinking coffee at home in a cup made by your hands.” Followed by another story where she called herself, “Potter”. Anushka spared some time to give attention to her hobby.

In London, the couple were seen enjoying quality time. They even took some time out for their fan and clicked a picture with them.

In the pictures, Anushka is seen wearing a cute pink top with blue jeans with minimal makeup. The hoop earrings are adding to her beautiful look.

Anushka went to the UK to support husband Virat Kohli. Due to the unfortunate loss of India, the couple had to stay in London till finals because of prior hotel and flight bookings. The couple returned on Thursday and were seen twinning their airport look. Anushka and Virat are famous for their similar airport look.

On the professional front, Anushka Sharma was last seen in the movie Zero, starring opposite Shahrukh Khan and Katrina Kaif. The movie wasn’t a big hit. In an interview with Hindustan Times, when Anushka was asked about her future projects, she said, “I think I have reached that position and security as an actor in my career, where I don’t need to do things or sign films just because I have to fill up time.”