Here are some interesting and lesser known facts about Ayushmann Khurana 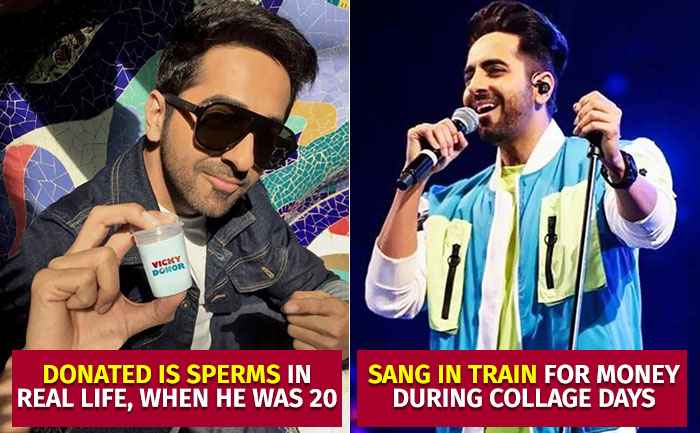 Ayushmann Khurana is undoubtedly one of the most talented and versatile actors of B-Town. Ayushmann — who is basking in the grand success of his latest release Dream Girl —  has turned a year old today (14th September 2019). The handsome hunk made his acting debut in Hindi film industry with romantic comedy Vicky Donor in 2012 and for that, he got the Filmfare Award for Best Male Debut.

Having done many unconventional movies such as Vicky Donor, Shubh Mangal Saavdhaan, Badhaai Ho and Andhadhun, Article 15 and Dream Girl, Ayushmann Khurana has created a niche for himself in Bollywood. In his career spanning less than a decade in the film industry, he has received numerous awards including a National Film Award and three Filmfare Awards.

It was not easy for Ayushmann to reach this point. Yes, he has gone through many ups and down to achieve the stardom in Bollywood. On the occasion of his birthday, we will be talking about some unknown but inspiring and interesting facts about Ayushmann Khurana. Without any further ado, let’s take a look.

Ayushmann Khurrana was born on September 114th 984, in Chandigarh

2. Ayushmann is the son of an Astrologer

Ayushmann Khurana’s father is an astrologer and an author who writes on the subject of astrology while his mother is a housemakers. She completed her master degree in Arts.

3. Ayushmann’s brother is a radio jockey

One of the most surreal moments of my life. Co-hosted a part of #ZeeCineAwards2019 with my super sibling @aparshakti_khurana. Your journey is unique. You completely own it, whatever you do, in a style which is inimitable.

Ayushmann’s brother Aparshakti Khurana is a radio jockey at Radio Mirchi 98.3 FM in Delhi. He debuted in Hindi film industry with Aamir Khan’s 2016 film Dangal. Later, he appeared in several Bollywood movies such as Stree and Luka Chuppi. Now, he has numbers of movies in his kitty.

Thanks @filmfare for the Clutter Breaker of the year award. #filmfareglamourandstyleawards #Filmfare

The Dream Girl actor decided to become an actor when he watched Madhuri Dixit’s superhit film, Tezaab in 1988. At that time, He was merely 4-year old.

#worldtheatreday We performed a street play called Mann Ki Bhadaas – a musical at IIT Powai in 2002. Our theatre group Aaghaaz from DAV college Chandigarh got the first prize that year. That was the first time a college from a non metro city participated in Mood Indigo and got the first prize. Cant forget that day. @rochakkohli and @charandeepkalra are also in the pic. I’m sure it will be difficult for you guys to recognise me in this.

After completing his schooling from St. John’s High School, Ayushmann decided to take admission in DAV College, Chandigarh, where he completed his high school.

6. Ayushmann is a founder of theatres group in Chandigarh

7. Ayushmann is a well-qualified actor

#Article15 just had a glorious 50 day run in theatres and here I get the certificate of appreciation for the contribution towards the society as the Actor Of The Year. Thank you @anubhavsinhaa sir for creating such a socially relevant film. Thank you @shaina_nc maam and @thetimesofindia for the felicitation. #TimesPowerMen

After completing his high schooling in Chandigarh, Ayushmann went to Punjab University to pursue his master degree in Mass Communication from School of Communication Studies. He is one of the most qualified or educated actors in Bollywood.

8. Ayushmann used to sing in train during his college days

Yes, you read it right, collecting money during college days is not an easy task. In order to make money, Ayushmann Khurana used to sing in trains while studying. Speaking about the same, Andhadhun actor said,

In fact, I want to share how we used to perform in trains. During my college days, there was a train named Pashchim Express that used to go from Delhi to Mumbai. So I, along with my friends, used to get onto the train and we used to go to every coach to sing and perform. Passengers used to give us money which we used to collect. We used to earn so much that we managed to sponsor our Goa trip from it! So yes, you can say I am a train singer.

You must have heard or read, talent or struggle never goes empty. Ayushmann Khurana was noticed for the first time in 2002 on Channel V, in a reality show PopStars. Exactly after 10 years from that opportunity, he made his acting debut in Bollywood.

10. Ayushmann’s first job was as an RJ

Before making debut in Bollywood debut and after completing his post-graduation in Mass Communication, he got his first job as an RJ at  BIG FM in Delhi. He also hosted a show called Big Chai – Maan Na Maan, Main Tera Ayushmann.

It’s #6YearsOfVickyDonor!! Here's a big shout out to the outstandingly talented team that came together to tell the story of Vicky & his peculiar relationship with his doctor friend, Dr. Chaddha aka powerhouse talent #AnnuKapoor. It laid the groundwork & gave me the confidence for some more unconventional choices in my career, down the line. Will always be indebted to my director/mentor @ShoojitSircar for giving me such a special film, another shout out to my lovely co-star @YamiGautam, you were amazing! And my visionary producer @ronnie.lahiri & super stud big bro @thejohnabraham. The legendary writer extraordinaire @juhic3. Cutest stylist and cameo player @veerakapuree. Here’s to Vicky Donor – one of the most special & enriching experiences in my career!

The versatile actor won the second season of Indian reality TV show MTV Roadies in 2004. Having won the title of MTV Roadies quite helped him entering into an anchoring career. Later he became a video jockey at MTV with Pepsi MTV Wassup, ‘The Voice of Youngistaana’ and a season of ‘Rock On It’ was a show for providing information to the youth.

Yes, The Andhadhun actor was one of the youngest Indian actors who has received the Young Achievers Awards in 2007. He is also the youngest recipient of the Bharat Nirman Award.

It’s been an honour to be awarded as “best actor of the year” at News24’s Jashn-E-Youngistan by Vice President of India Shri Venkaiaah Naidu. ———————- The best part was even @aparshakti_khurana got felicitated. This was the first time our papa was also in the audience when we got awarded. Too special. Thanks #JashnEYoungistan Thanks @anurradhaprasad @news24tvchannel @nierusharma

After appearing in so many Television shows, Ayushmann turned host. Yes, Ayushmann has hosted multiple reality TV shows such as India’s Got Talent, Second season of MTV Rock On. Apart from that Ayushmann was also a part of the anchoring team of Extra Innings T20 for Indian Premier League Season 3.

We have already mentioned above that Ayushmann made his debut with a romantic comedy, Vicky Donor in 2012, which turned out to be a super hit movie. In Vicky Donor, he starred opposite Yami Gautam.

16. Ayushmann Sung songs for many movies

Apart from acting, Ayushmann knows how to sing or play the guitar. He has composed and sung many songs including “Pani Da Rang,” “O eerie,” “Sadi Gali Aa Jaa” and “Yah Hun Main” in which Pani da Rang was a chartbuster.

17. Ayushmann tied the knot with her childhood sweetheart

With my #Dreamgirl @tahirakashyap ❤️

Ayushmann Khurana is an admirer of his beautiful wife, Tahira Kashyap. Ayushmann and Tahira Kashyap gor married in 2011 and they were blessed with a son (Virajveer) in 2012 and daughter (Varushka) in 2014. Revealing their love story, Tahira Kashyap had once said,

“Our story goes back 12 years. I don’t want to sound vintage but dating back in those days in Chandigarh was a different experience or perhaps we were both just extremely slow and shy. Both of us attended the same Physics tuition class when we were in the 12th standard. It was a batch of around 60 students and when I first met Ayushmann I thought his name was Abhishek.”

18. Ayushmann is an actor since childhood

Ayushmann Khurana has been showing his acting skills ever since he was a kid. He acted in plays and national college fests and won multiple prizes as well. Some of the many fests he took part are Mood Indigo (IIT Bombay), OASIS (Birla Institute of Technology and Sciences, Pilani).

In 2015 his movie ‘Dum Laga Ke Haisha’ received a National Film Award for Best Feature Film in Hindi. In the film, he starred opposite Bhumi Pednekar in the lead role.

In the year 2015, Ayushmann released his autobiography, titled ‘Cracking The CODE – My Journey To Bollywood’. It was co-written by his wife Tahira Kashyap.

These are the facts about Ayushmann Khurana that you may not have known earlier. If you liked this article do not forget to share with your FRIENDS.