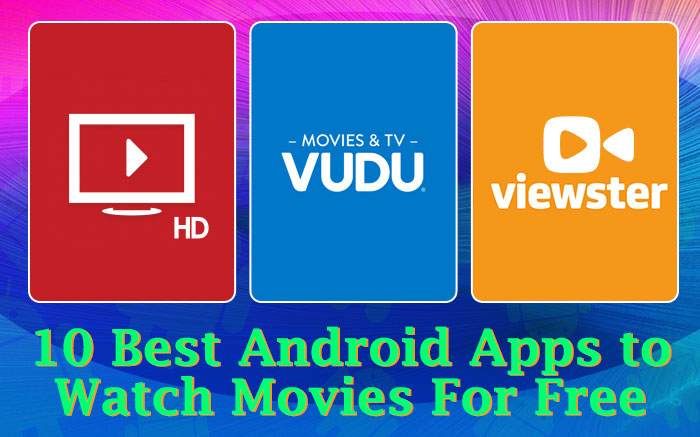 There are plenty of websites available offering free movies but instead of depending on web browsers to watch movies online, you should download some best movie apps which allow users to watch HD movies and download for free. Instead of searching movies on browsers, you will have to search the name of movies and TV Channel that you need on these free movie apps.

Using these best free movies apps, you can stream movies to your TV, Chromecast or Game Console. Some of these free movie apps give you an option to download and watch movies offline on Android mobile phones. Yes, if you do not have a data plan, you can watch that downloaded movies in offline mode. The list of best free movie apps we have listed below to watch movies online. This list is updated every day and it was last updated on 8th August 2019.

YouTube is one of Google’s subsidiaries. It was launched by the three former employees of PayPal in 2005. Over a period of time, YouTube has become one of the most downloaded apps and biggest video platforms.

The video platform offers its billions of users free music videos, comedy clips, documentary films, Bollywood movies, Hollywood films, Telugu movies, Hindi dubbed movies, movie trailers and live streams. Users are allowed to upload videos on YouTube for free. Most of the contents available on YouTube is uploaded by individuals but several media corporations such as CBS, the BBC, Vevo, and Hulu offer some of their material via YouTube as part of the YouTube partnership program. Free Tamil HD Movies Download Sites 2019

YouTube is one of the most popular free movie apps, providing its user to download movies or videos for free. Yes, you can watch that downloaded movies in offline mode as well.

Sony Crackle is one of the best movie apps to watch movies online and download for free. Yes, this free movie app provides new contents every day and does not even require sign-up. You can download and watch Hollywood movies, Web Series, TV shows and Original contents free of cost. The new Wi-Fi-only option lets you view content without using data.

This American company has extended its services to more than 20 countries. According to Wikipedia, Crackle is currently offering its services in 21 countries. The service can be used all the connected devices such as mobile phones, tablet, Smart TVs and Desktop.

Originally known as Grouper and later renamed Crackle, the streaming service’s name was officially changed to Sony Crackle on January 14, 2018. Sony Crackle is currently not available in India but it can be accessed through VPN network.

SnagFilms is a free movie app that allows its user to access to documentary and independent films. This free movie app is reported to have more than 5,000 films. It also has contents produced by National Geographic such as Super Size Me, The Good Son: The Life of Ray Boom Boom Mancini, Kicking It and Nanking.

It is one of the best and free movies apps which is updated every week with the new content.

Netflix, an American media-services provider, was founded in 1997, has become of the world’s largest OTT platforms. Netflix is a not a free movie app but you can avail its free services for 30-days. Yes, Netflix provides 30-days free subscription to its new user. There is no better website than Netflix when it comes to the choice of contents.

This popular movie app has gained popularity in India as well.

The company has extended its wing to the global level and has its office located in the UK, US, Germany, Sweden, India, Austria and dozens of countries. In some countries, it operates on video-only membership, which means people living in that country do not require to have a full Prime subscription.

In some countries, Prime Video additionally offers Amazon Channels allow viewers to subscribe to other suppliers’ content, including HBO in the United States. You can download movies, web series, comedy show or documentary from Amazon Prime.

Hulu is an American company, which provides video contents on the basis of people’s demand. The majority of its stoke owned by Walt Disney Direct-to-Consumers & International, which is a division of The Walt Disney Company.

Hulu is one one of the best but paid movie apps but you can avail its trial version for free. This movie app runs on a subscription basis but has plenty of original contents. In the free version of Hulu, you would not get as many contents as its premium users. You can also download movies watch it later as per your convenience as it has offline mode as well. You can watch over 100 movies free on this platform.

Notably, the Hulu movie app can be downloaded for Android and iOS phones. Again, Hulu isn’t available in all countries around the world. So, the usage of a VPN or proxy is required in many countries. You can also control your viewing experience from your phone or tablet to your TV with Chromecast, Xbox One, PlayStation 3 and PlayStation 4 using the in-app remote control.

Viewster is another best and free movies app where you can watch movies and download in HD quality. Yes, you read that right, you do not even require to sign up or any external application to watch movies on your Android or iOS. The company was founded days back in 2007 and it has headquarters in Zurich, Switzerland.

There are plenty of contents including Hollywood movies, TV shows, web series or Animation movies are available for free download. Viewster has expanded its network globally and now they have reached to almost 120 countries around the world. According to Wikipedia, Viewster has more than 39 million unique visitors per month and ranked top 10 online video property in the U.S. in August 2014.

Similar to Hulu, Hotstar is one of India’s free movie apps, service is also a subsidiary of The Walt Disney Company. The over-the-top streaming service is owned by Novi Digital Entertainment, a subsidiary of Star India. Hotstar has a huge collection of Bollywood, Hollywood, Telugu and Tamil movies. Apart from movies, Hotstar has also started releasing its own exclusive web series and movies.

Hotstar also runs on a Subscription basis but there are plenty of movies you can watch and download for free on Hotstar. You can also watch live streaming of Cricket tournaments such as the Indian Premier League and World Cup 2019 on Hotstar. During World Cup 2015, Hotstar garnered more than 340 million views.

During Indian Premier League 2019 finale, this free movie app had charted another milestone by garnering 18.6 million concurrent users. Hotstar also recorded 15.6 million concurrent active users during India-Pakistan 2019 World Cup match, which held on 16th June 2019. Hotstar has become of the most trusted movie application, from where you can download full movies in HD quality.

VUDU is also one of the best free movies app, which has thousands of movies and TV shows. Yes, you can watch and download those thousands of hours of entertaining content for free of cost. From VUDU, you can buy and rent movies as well.

You can easily find movies belonging to each category as it has been categorised very well. The Vudu app has a very simple and clean interface for quick access. The only thing you require to get access to the VUDU app is to have a User Account, which is totally free. Vudu offers some of the best movies and TV shows to watch with a library of over 20000+ Programs.

Popcornflix is one of the most popular movie application or OTT platforms where you can watch movies and download for free. The application is available on Google Play  Store and iTunes app store. Both Android and iOS users can download movies from Popcornflix. There are more than 1500 movies available on Popcornflix database. Their movie list is updated on every day and it is one of the best movies apps when it comes to watching foreign movies.

Popcornflix provides almost all kinds of movies such as action, horror, comedy, documentary and entertainment. It has the simple navigation bar which you to categorize the movies according to genes theme, date released or many more. Notably, the service is currently available in the United States and Canada but they are all set to extend their services to other territories in the future.

Note: These free movie apps which are not available on Google Play Store or iTunes Store could be harmful to your mobile phones. So, We recommend you to grant the permissions which you think is best suited for the functioning of the movie app. You can find permissions under settings on your Android or iOS device.

Ahead of Official Release, Spider-Man Far From Home Entire Plot Leaked on Reddit