Billie Elish fights body shamers by stripping down during concert 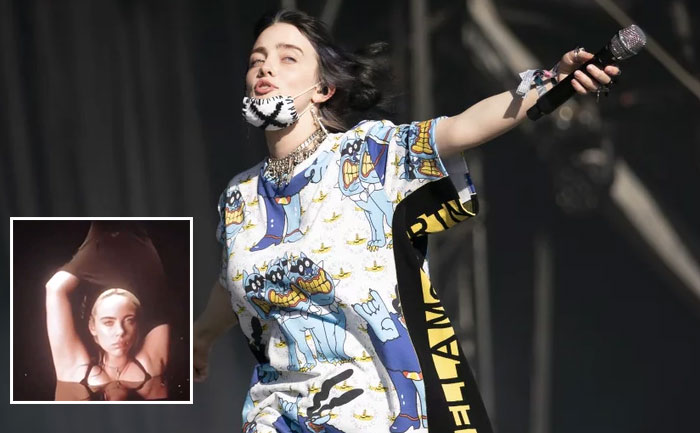 Grammy Winner singer Billie Eilish made a powerful statement during her World Tour Debut. The 18-year old known for her oversized outfits ever since she debuted on the singing platform in 2018 left her fans stunned with her bold move on stage. Elish took her clothes off at a concert in Miami to slam body shaming.

The 18-year-old singer, who has been subjected to body shaming ever since her debut, kicked off her world tour by taking off her shirt during her Miami concert.

As reported by TMZ, Billie Eilish at a recent show in Miami, the singer proceeded to take her shirt off, and said, “If what I wear is comfortable, I am not a woman. If I shed the layers, I am a slut. Though you’ve never seen my body, you still judge me for it. Why?”

In videos shared online, the singer can be seen removing layers of clothing, until she is standing in just her underwear, before being symbolically enveloped in a tar-like substance.

this moment will go down in the music’s story, BILLIE IS SO ICONIC pic.twitter.com/aaHu0mFtmF

She continued, “The body I was born with, is it not what you wanted? If I wear what is comfortable, I am not a woman. If I shed the layers, I’m a slut. Though you’ve never seen my body, you still judge it and judge me for it. Why? We make assumptions about people based on their size and decide who they are. We decide what they’re worth. If I wear more. If I wear less.”

She concluded by asking, “Who decides what that makes me? What that means? Is my value-based only on your perception? Or is your opinion of me not my responsibility?”

Billie made a record by being the youngest singer to perform a James Bond theme song, for the upcoming film ‘No Time To Die’. She is also the youngest person and second person ever to win the four main Grammy categories, Best New Artist, Record of the Year, Song of the Year, and Album of the Year in the same year.