BTS’s Jimin now has a plane on his name; Fans go to epic level of expressing love

South Korean boyband, BTS is known for having a crazy fan following across the globe. Jimin now has a plane on his name. His fans come up with this epic idea of expressing love 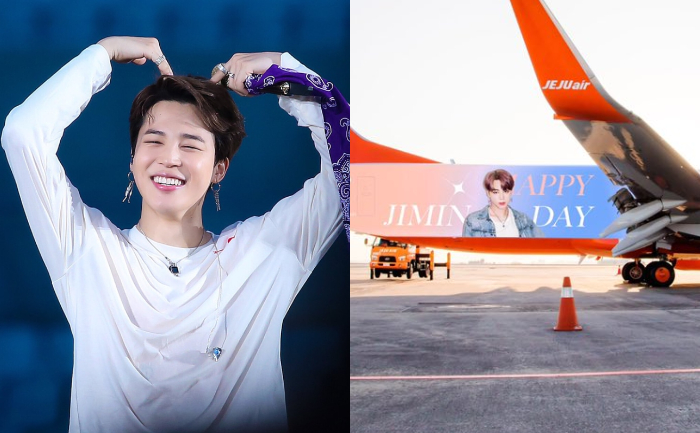 Undoubtedly, Bangtan Boys have one of the biggest fanbases among others. ARMY’s are spread across many countries and they never shy out expressing their love for each of the BTS members. Jimin now has got a plane on his name and it is all because his fans wanted to express their love for him months ahead of his Birthday. Many Jimin fans now might have a major life goal of traveling on this plane.

Every year ARMY’s do special activities(including charities) as a Birthday surprise for BTS members. Although there’s plenty of time to ring in the celebrations of Jimin’s Birthday this year, his fans from China have kickstarted the Birthday project. Jimin’s Chinese fanbase recently unleashed the customized exclusive airplanes which have the Birthday messages. The plane has been introduced as a 2021 birthday support project to celebrate his 27th birthday. There are now three planes with Jimin’s pictures placed on them. Apparently, the serving items inside these three planes would also have Jimin-themed items. The Birthday project has been launched in cooperation with Jeju Air.

The specially designed airplane with Jimin’s image, and from the flight tickets to the cup sets on the plane, all of these are “Happy Jimin Day!” theme pic.twitter.com/etDaELpV0H

Well, this would surely be an epic way of expressing fan love for Jimin. The idol has not officially reacted to these planes as yet.

BTS members Jin, Jimin, Jungkook, RM, Suga, J-Hope and V recently treated the ARMY’s with a mini-concert as they celebrated their eighth debut anniversary. During the Muster SOWOOZOO 2021, the members grooved to their own songs.