The curious story of Mandodari

According to the legend, Mandodari was a beautiful, pious and moral woman who always guided and advised her husband to do the righteous thing. She always requested Ravana to send Sita back to Lord Rama. But what happened to her when Ravana died? What did she do then? Here’s what the legend has to say about it.

The Uttara Ramayana narrates a story about the birth of Mandodari. Mayasura (Maya), the son of sage Kashyapa is married to the apsara (heavenly nymph) Hema. They have two sons, Mayavi and Dundubhi, but long for a daughter, so they start performing penances to seek the favour of the god Shiva. Meanwhile, an apsara named Madhura arrives at Mount Kailash, the abode of Shiva, to pay her respects. In absence of his wife Parvati, Madhura has clandestine coitus with Shiva . When Parvati returns, she finds traces of ashes from Shiva’s body on the breasts of Madhura. Agitated, Parvati curses Madhura and sends her to live in a well as a frog for twelve years. Shiva consoles Madhura and says she will become a beautiful woman and be married to a great valorous man. After twelve years, Madhura becomes a beautiful maiden again and cries out loudly from the well. Mayasura and Hema, who are performing penance nearby, answer her call and adopt her as their daughter. They bring her up as Mandodari. Ravana comes to the house of Mayasura and falls in love with her. Mandodari and Ravana are soon married with Vedic rites and bears Ravana three sons: Meghanada, Atikaya, and Akshayakumara. Mandore, a town located 9 km north of Jodhpur, is believed to be the native place of Mandodari. Ravana is treated as a son-in-law among some local Brahmins and has a temple dedicated to him here. Despite Ravana’s faults, Mandodari loves him and is proud of his strength. She is aware of Ravana’s weakness towards women. A righteous woman, Mandodari tries to lead Ravana to righteousness, but Ravana always ignores her advice. She advises him to not to subdue the Navagraha, the nine celestial beings that govern one’s destiny, and not to seduce Vedavati, who would be reborn as Sita and cause the destruction of Ravana. Ravana kidnaps Sita, the wife of Rama, the exiled prince of Ayodhya, who is an incarnation of the god Vishnu. Mandodari advises Ravana to return Sita to Rama, but to no avail. Mandodari knows this lust will bring the downfall of Ravana. 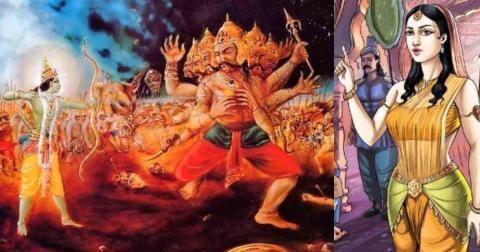 When all attempts for a peaceful return of Sita fail, Rama declares war on Ravana’s Lanka. Before the final battle against Rama, Mandodari makes a last attempt to dissuade Ravana, but to no avail. Finally, Mandodari stands by her husband in the final battle like an obedient and faithful wife,[4] though she also advises her son Meghanada, alias Indrajit (“One who had conquered Indra; the god-king of heaven”), not to fight Rama.

After the death of Ravana, Rama advises Vibhishana to take Mandodari as his wife, even though he already has a wife. A reason for the marriage, as is the belief, is as an alternative to suicide for the widowed Mandodari, which is averted by Rama.

Famous Bollywood Brides Who Wore Stunning Jewellery At Their Wedding