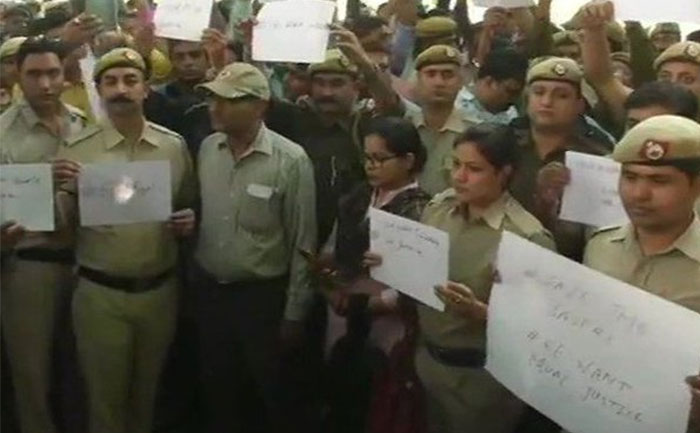 Delhi cops launched a massive protest outside the Delhi Police headquarters today, blocking one of the busiest roads in the capital. They were agitating against the fallout of violent clashes between cops and lawyers at the Tis Hazari court over parking issues. The violence had left at least 20 security personnel and several advocates injured.

#WATCH Delhi Police personnel raise slogans of "Humara CP (Commissioner of Police) kaisa ho, Kiran Bedi jaisa ho" outside the Police Head Quarters (PHQ) in ITO. They are protesting against the clash that broke out between police & lawyers at Tis Hazari Court on 2nd November. pic.twitter.com/f4Cs7kx9Dr

The Indian Police Service (IPS) has tweeted in support of its Delhi colleagues, saying police officers across the country supported their action.

Incident involving police & lawyers unfortunate. All should take a balanced view of it based on facts in public domain. Countrywide, police stands in solidarity with those police personnel subjected to physical assault & humiliation. Condemn all attempts to break law, by anyone!

Shocked by the incident, The High Court had ordered the transfer of two senior police officers and suspension of two other officers and compensation to the injured lawyers. This irked the police fraternity who felt that there was no action against the lawyers.

#WATCH Delhi: Police personnel raise slogans of “we want justice” outside the Police Head Quarters (PHQ) in ITO. They are protesting against the clash that broke out between police & lawyers at Tis Hazari Court on 2nd November. pic.twitter.com/XFAbQn2gay

The Tis Hazari incident was followed by another violent confrontation, caught on a mobile phone camera. It showcased a policeman being slapped and beaten outside Saket District Court by a group of lawyers.

If everyone starts settling scores themselves like these #lawyers in #Delhi did, we won’t need lawyers anymore! 🙄 #DelhiPolice #Police pic.twitter.com/wbrMMWxyph

Delhi Police Commissioner Amulya Patnaik on Tuesday urged protesting police personnel to return to work and said they should behave like a “disciplined force“. He further added that their concerns will be addressed. But despite the police chief’s assurance, the protests continue. Policemen are demanding swift action against the ‘culprits’ in connection with the clash with advocates.

We shall keep you updated with more on this soon.