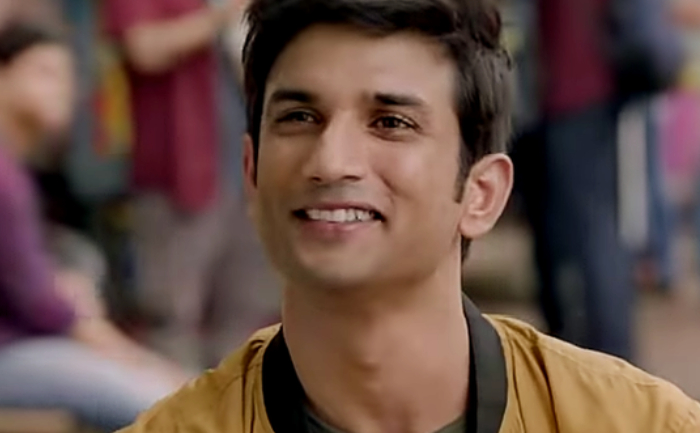 The makers of upcoming film ‘Dil Bechara’ treated the audience with the much-awaited trailer, featuring late actor Sushant Singh Rajput and Sanjana Sanghi. The film is an adaption of popular novel ‘The Fault in Our Stars’ by John Green. In the recently released trailer Sushant and Sanjana’s adorable chemistry makes us emotional, reminding the fact that the actor is no longer with us. Surprisingly, the actor can be seen talking about life and death in the trailer. And that particular scene hits us in a totally different way. Here, take a look at the moments from the trailer that will make you miss Sushant even more.

It has always been evident that Sushant Singh Rajput was a big time Shah Rukh Khan fan. The actor even confessed about how he was inspired King Khan’s silver screen journey. The ‘Dil Bechara’ trailer shows the glimpse of his love for the superstar, as he recreates some of the SRK moments in this upcoming film.

In one of the scenes with Sanjana Sanghi, the caption on Sushant’s T-shirt read ‘Help!’. This surely makes us even more emotional. His fans pointed out on social media that if the actor would have got the help at the right in his life too, he would have been with us.

This hits differently. Outside he is smiling but from inside…

He is screaming for “HELP” pic.twitter.com/VNOI4u4h8T

The scene when ‘Kizie’ clears that she’s not ‘Manny’ girlfriend. He asks her, ‘Abhi nahi ya kabhi nahi?’ Upon receiving the reply ‘kabhi nahi’, the actor’s expressions after he says ‘chal jhoothi!’ are unmissable! His childlike smile reminds us of his real persona.

The scene when ‘Manny’ Sushant tells ‘Kizie’ Sanjana that ‘Tumhaara mujhe iss tarah se ignore karna, won’t change my feelings for you’ and if that doesn’t win your heart, nothing can.

Here below you can watch the full trailer of the film.

Stylize Your Golden Jewelry With Inspiration From THESE Looks Of Jannat Zubair, Avneet Kaur And Ashnoor Kaur