A Discovery of Witches season 2 – Air date, cast, trailer & all you need to know 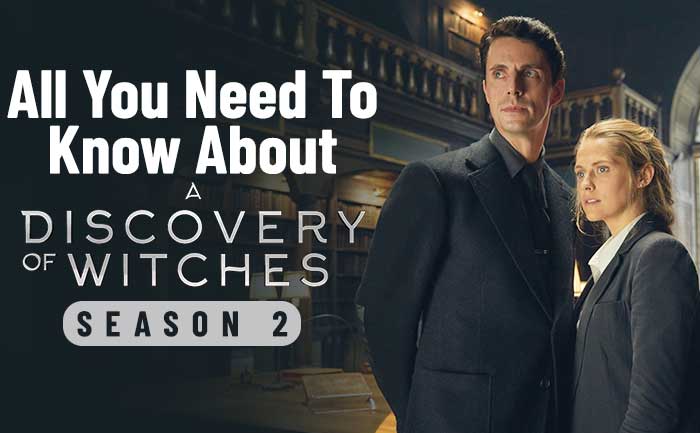 The series is based on the All Souls trilogy by Deborah Harkness, named after the first book in the trilogy. The book was published in the year 2011 and emerged as one of the New York’s Best Seller upon its release.

In this article, we will be talking about everything about A Discovery of Witches season 2 such as release date, cast, trailer, plot and more.

All You Should Know About A Discovery of Witches Season 2

A Discovery of Witches 2 release date: When will it return?

The first season of the series premiered in the UK on Sky One on 14 September 2018.  The first season had eight episodes in it. You can watch all episodes of Discovery of Witches on NOW TV as well as it has been streaming on that date after each episode was aired.

The international distribution of the programme is handled by Sky Vision. From January 2019, the series became available on AMC’s subscription services Sundance Now, Shudder, and AMC Premiere. The Live Mirror will update the release date of A Discovery of Witches once it is officially released.

It is most likely that the second season of A Discovery of Witches will be released in 2020.

What will happen in A Discovery of Witches Season 2?

The second and third season of A Discovery of Witches will be based on books titled Shadow Of Night and The Book of Life.

Sarah Dollard (Doctor Who, Being Human) and Susie Conklin (The Musketeers, Cranford), have been assigned to write the second season and Conklin has also been acting as executive producer alongside Bad Wolf production company co-founders Jane Tranter and Julie Gardner, as well as Lachlan MacKinnon and Harkness herself.

Tranter is quoted as saying to Digital Spy, “We were absolutely thrilled that A Discovery of Witches was such a hit with viewers. There was a real sense of community throughout the run as fans old and new joined together to watch each week.

“We cannot wait to continue the journey with them and, as the show continues to sell around the world, bring a global fanbase to these engaging and fascinating characters.”

The story of the show actually revolves around Diana Bishop, a young witch who has no encounter with magic. After she comes across a long-running manuscript which pulls her into the World of magic, thereafter she meets Matthew Clairemont, a vampire. And after that, they face the problems which are coming their way together.

Who is in the cast of A Discovery of Witches 2? Will there be any new faces?

The protagonist named Dian Bishop will be seen playing Teresa Palmer along with Matthew Goode (Matthew Clairmont) in the second season of A Discovery of Witches. Alex Kingston and Valerie Pettiford will be back as Sarah Bishop and Emily Mather respectively.

We'd like to welcome the extremely talented @mikejibson to the #ADiscoveryOfWitches family! He is our Emperor Rudolf II of course. Enjoy the journey Michael!
©Harry Livingstone pic.twitter.com/Mkr4PkqNa7

The official handle of SKY TV has announced that Michael Jibson will join the cast in season two as Emperor Rudolf II.

That’s all we know about the A Discovery of Witches 2 cast at the moment, but we will keep updating this article.

Is there a trailer of A Discovery of Witches?

How to Watch A Discovery of Witches 2 in the UK & US?