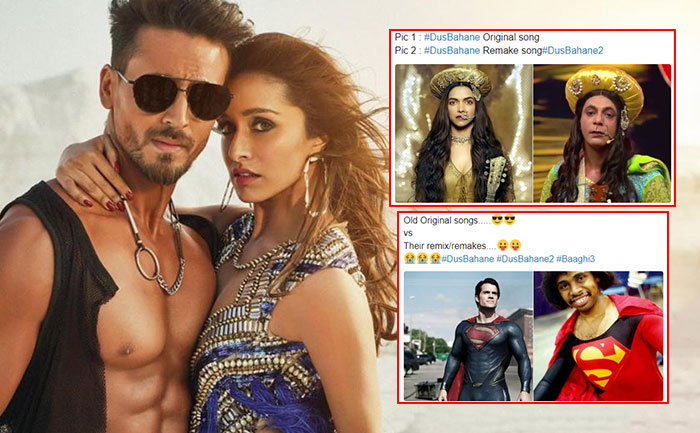 ‘Baaghi 3’ has already created major excitement ever since it was declared and the trailer just dropped which already crossed over record 100million views in 72hours. The dance number starring Tiger Shroff and Shraddha Kapoor, Dus Bahane 2.0, started getting compared with the Old Dus Bahane and it sparked meme fest on social media.

However, the old song starred Abhishek Bachchan, Sanjay Dutt, Sunil Shetty, and Zayed Khan in the 2005 movie, Dus. The original track was crooned by popular singers KK and Shaan. It was composed by Vishal-Shekar. The new Dus Bahane is also composed by Vishal and Shekhar and also Tulsi Kumar.

While some fans loved the new version, others began criticizing it for the lack of innovation and as soon as the new song from ‘Baaghi 3’ was released it triggered memes on social media.

Check out the memes:

Having to hear re-created songs is such a pain! #DusBahane pic.twitter.com/x51Pudwp01

Talking about the movie, the success of the 2016 film ‘Baaghi’, was turned into a franchise with the 2018 film ‘Baaghi 2’ and the makers announced the third film even before the releases of the second. Tiger Shroff plays the lead character, Ronnie, in all three films, while Shraddha Kapoor will make a comeback after the first film.

‘Baaghi 3’ is all set to hit the theatre on 6th March 2020 and has Tiger Shroff and Shraddha Kapoor in lead roles. It also features Jackie Shroff, Vijay Varma, and Ankita Lokhande The movie is produced by Nadiadwala grandson and directed by Ahmed Khan.

ALSO READ: Baaghi 3 Trailer: Ronnie Aka Tiger Shroff Is Back To Fight His Biggest Battle