Could they get any more cuter? 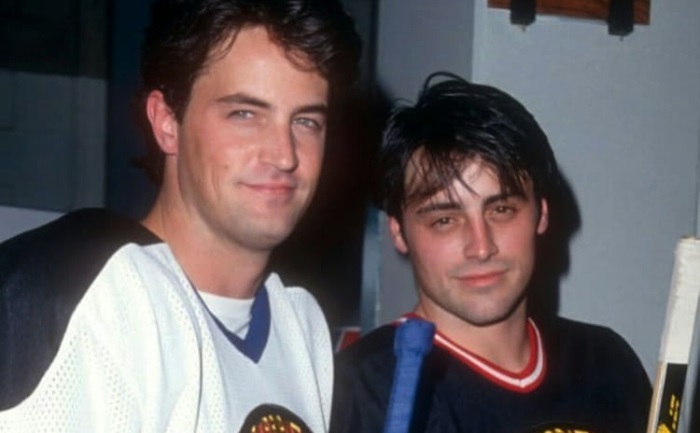 Chandler Bing and Joey Tribbani’s relationship on the show Friends is one of the greatest television bromances ever. On 22nd September, Popular TV show Friends completed 25 years. Throughout all 10 seasons, these two characters were inseparable and their comical brotherly love kept audiences roaring with laughter.

1. The One Where Joey-Chandler love Baywatch 2. The One Where Joey Buys The Barcaloungers

Joey starts making money when he gets a new big acting gig on “Days of Our Lives”, so buys some things for the apartment like a big screen TV and two leather recliners, one for him and one for Chandler. The best part was whenever they would put the footrest up at the same time and say “ahh” as they did it together.

3.The One Where They Are Bracelet Buddies Joey buys Chandler a bracelet that says to my “best bud” as a thank you gift for being a great friend. Chandler rants to Phoebe in the coffee house about how the bracelet is a woman repeller, and how unmasculine it is to wear. Chandler accidentally loses the bracelet and buys a new one so that Joey doesn’t feel hurt. Gunther finds the bracelet and Chandler ends up with two bracelets. Joey enters the coffee shop and asks Chandler why he has two and Chandler says that the other one is for him and to that  Joey says “we’re bracelet buddies!” Chandler fakes excitement and says “that’s what they’ll call us!”

4. The One Where Joey Officiated Monica And Chandler’s Wedding When Chandler married Monica, Joey officiated their wedding ceremony. Thankfully, Joey did not end up giving his “giving and receiving” speech he came up with before the wedding, which basically had the same words over and over again.

5. The One Where They Hug Each Other Too Often Over the 10 seasons of the show, Joey and Chandler have hugged each other a lot. In one season 6, when they were hugging, Joey asks Chandler, “Hey, do we do this too much?” to which Chandler replies “I think so.” Later Joey and says “get off me!” and they end up doing an awkward and formal handshake at the end of the scene.

6. The One Where Monica Brings A Wishbone From Work. 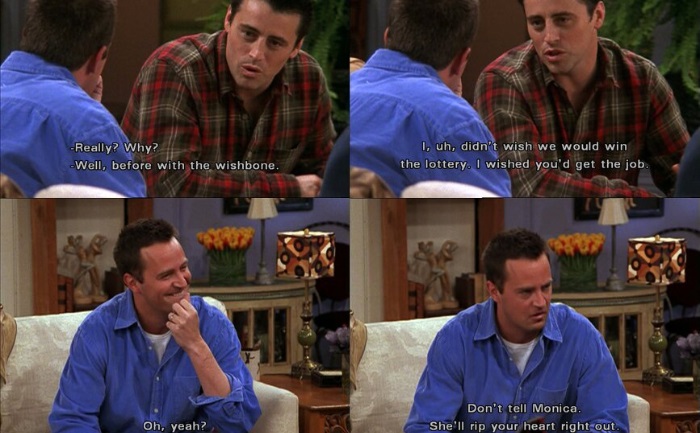 Joey and Phoebe are seen pulling the wishbone and Joey wins the bigger side. Monica troubles him about what he wished for, later in the episode, Chandler finds out Joey wished that he should get the internship-turned-assistant job he’d been working so hard at. Best friend’s goals or what?

They truly are “Best Friend Goals.”

ALSO READ: FRIENDS: The One Where Joey, Rachel, And Monica Reunite