The entire cast and crew of Yeh Rishtey Hain Pyaar Ke celebrated Ganesh Chaturthi this year on the sets of the show. 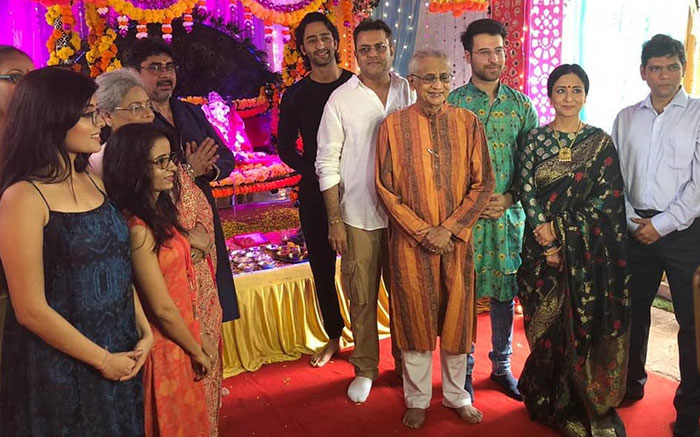 The entire cast and crew of one of the most popular Indian TV shows, Yeh Rishtey Hain Pyaar Ke has celebrated Ganesh Chaturthi 2019 on the sets of the show. The chemistry of Shaheer Sheikh and Rhea Sharma is being loved by the masses. Notably, both Shaheer (Abir) and Rhea (Misthi) have confessed their feelings for each other and makers are also considering to take this Jodi on a date.

At a time when the entire country is celebrating Ganesh Chaturthi with full enthusiasm, the cast and crew of Yeh Rishtey Hain Pyaar Ke, irrespective of what religion they belong came together to celebrate it on the sets of the show.

If you look at the pictures, Shaheer Sheikh, Rhea Sharma, Ritvik Arora and others are seen posing together after doing the puja. Shaheer Sheikh looks dapper in all black dress while Rhea looks stunning in her blue attire.

The viewers of the are desperately waiting to see Shaheer and Rhea romancing each other on the show. Because they look cute together and can spark magic in a regular scene with such grace that they have their fans gushing with smiles and ‘awws’.

Speaking about the show, Abir and Mishti recently performed a romantic dance on the occasion of Janmashtami. Meanwhile, Kuhu is completely against Mishti and blames her for all the problems she has been facing in her life.

In order to revenge from Mishti, Kuhu has joined hands with Kunal, who wants Mishti out of Abir’s life and thus they hatch a plan to make it true. At the end of the last show, Kunal and Kuhu’s evil plan lands Mishti in the hospital.