On Wednesday, supermodel Gigi Hadid treated her fans with a sleeping Khai snap on her Instagram story. Gigi Hadid and Zayn Malik became embraced parenthood for the very first time when they welcomed baby daughter Khai in September of last year. On Wednesday, the supermodel took to her Instagram story and treated her fans with an adorable picture of her baby sleeping in her arms. 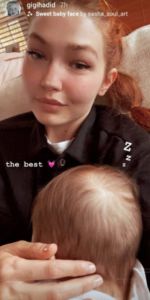 Gigi shared the photo and captioned it as: “the best” followed by a pink heart emoji. In the photo,  Khai is seen with a head full of golden-brown hair and the mommy seems to be rocking her newly-dyed red hair with no-makeup on her face. However, she did not reveal her daughter’s baby as she kept it covered with her hand.

She has refrained from showing her daughter’s face in pictures.  In the past, when she and Malik have shared images on her social media, she did not reveal the little’s one face.

Many media reports revealed that Gigi accidentally let out Khai’s face through an Instagram video. However, the video was deleted quickly.

The model often shares photos of her daughter on her social media handle and we can definitely say that she’s loving the mommy life.  Recently, she resumed work and returned to the runway for Versace’s Milan autumn/ winter 2021 show.

7 Ultimate Tips To Get More Views On YouTube Videos