Gudi Padwa/ Ugadi is celebrated across several regions in India. On this day people hoist the Gudi flags, make rangolis, prepare sweet and savory food items. Know everything about this festival Gudi Padwa is a spring-time festival that clocks the traditional new year for Marathi and Konkani Hindus. On the first day of the Chaitra month which is the beginning of the New year according to the lunisolar Hindu calendar, Gudi Padwa is celebrated. The term-Padava (Padwa) is hailed from the Sanskrit i.e Pratipada that refers to the first day of a lunar fortnight. The New Year of the Telugu and Kannada people is called Ugadi, which is celebrated on the same day. This festival is known by different names in different states and it is also celebrated in different styles as well. Know everything about this festival from date, significance and puja rituals.

Know everything about Gudi Padwa/ Ugadi:

The name Gudi Padwa is composed of two words -Gudi and Padwa. In the southern region, it is called Ugadi. On this auspicious day, Indians decorate their doorsteps with Rangoli, flowers, mango leaves and hoist Gudi flags (specifically in Maharashtra). The festival is celebrated because of the arrival of the spring season. As per Hindu mythology, this festival also symbolizes Lord Ram’s victory over Ravan. It commemorates the celebrations in honor of Lord Ram after his return to Ayodhya after completing 14 years of exile. 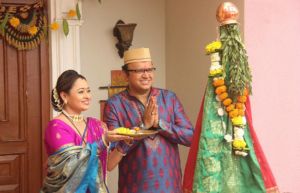 This year Gudi Padwa pratipada tithi will start at 8 am on 12 April and it will end on 13 April at 10:16 am. On the day of this festival, people rise early in the morning and make arrangements for the celebrations and follow traditional rituals of the puja. The mahurat for the Gudi hoisting is between 11:56 am to 12:24 pm this year. 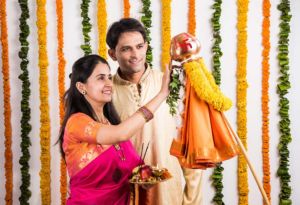