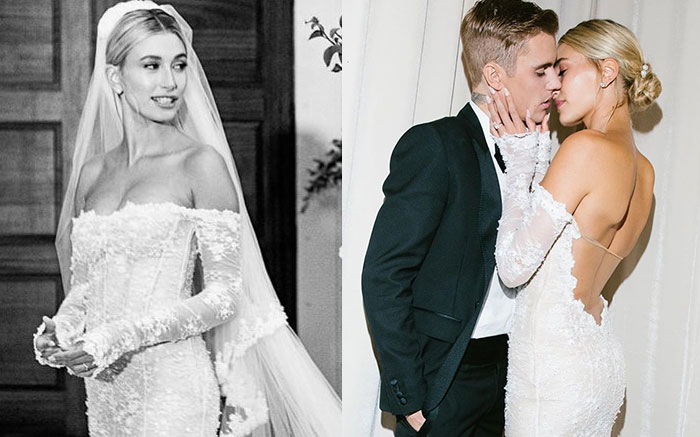 Justin Bieber and Hailey Baldwin exchanged vows once again in a lavish wedding ceremony. The much in love couple said I Do at in Palmetto Bluff, South Carolina on September 30. The wedding was attended by family and friends. The two had previously gotten married in a super-secret ceremony at a courthouse in New York City. Pictures from the wedding venue soon set the social media on fire.

A week after the supermodel Hailey Baldwin exchanged vows with singer Justin Bieber. She finally revealed the wedding dress she wore for the big day and it is truly worth the wait. Hailey took to Instagram to share a picture of her wedding on Monday.

The 22-year-old model also posted a close-up picture of the custom ivory white off-the-shoulder gown she wore on her big day.

@virgilabloh thank you for making my vision come to life and creating my dream dress. You and your @off____white team are incredible and I’m forever grateful I got to wear your beautiful creation. ❤️

It featured lace and pearl embellishment, a sweetheart neckline, long sleeves, corseting through the bodice and a mermaid skirt the goes into a long tulle veil.

last Monday was the most special day of my life:)

The veil has embroidery that reads “TILL DEATH DO US PART” across the end. The couple even showed off their wedding rings in one of the pictures.

Wedding Goals ? incredible images of the Bieber – Baldwin wedding have surfaced today. Just look at these stunning rings! If you’re looking for the perfect oval engagement ring come and have a chat about what we can create for you! #regencyjewellers #engagementring #weddingband #bieberwedding #ovalengagementring #ovaldiamond

Justin too shared some romantic pictures,

Even thugz get married

Beiber and Balwin had previously gotten married in a super-secret ceremony at a courthouse in New York City.