This picture of Hardik Pandya holding his and Natasa's new born son will melt your heart; view pic here Cricketer Hardik Pandya and Natasa Stankovic welcomed their Baby boy this week. Hardik had taken to his Instagram handle to announce the great news with fans. Now the proud father once again took to social media and an adorable picture of his bundle of joy with fans.

The Indian cricketer shared a picture of holding the baby in his arms. The look on his face has left fand in awe. The caption read, “The blessing from God 🙏🏾❤️ @natasastankovic__(sic)”

Check out the adorable pic here:

The blessing from God 🙏🏾❤️ @natasastankovic__ 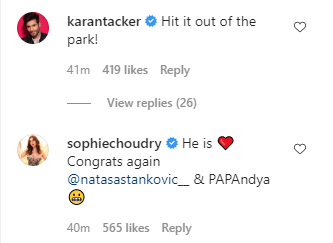 Hardik and Natasha had shocked everyone when they announced their engagement. The couple got engaged on December 31 and announced on January 1. Hardik and Natasa, a Mumbai-based Serbian actor, had made their relationship public on December 31. Hardik had proposed to Natasa on New Year’s in Dubai on a yacht and their photos back then had gone viral.