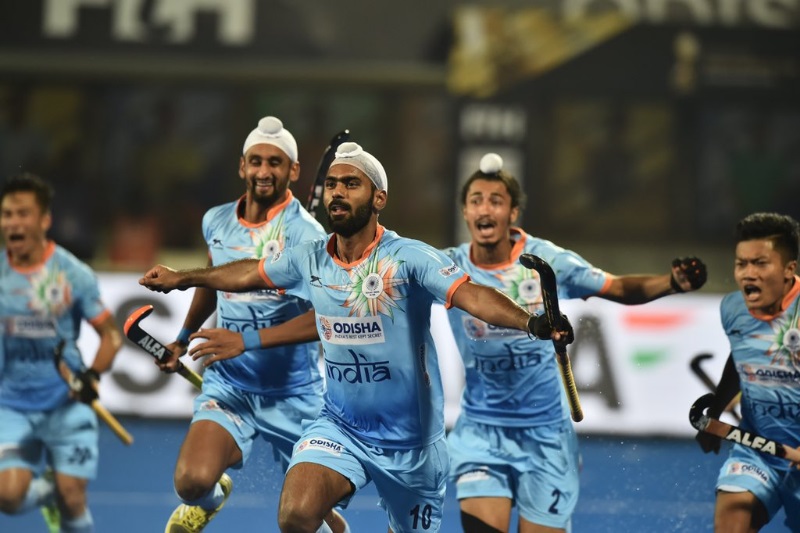 A last-minute goal by Simon Gougnard helped Belgium hold hosts India to a 2-2 draw in their second Pool C encounter at the Hockey World Cup in Bhuvneshwar on Sunday.

In an exciting encounter, India fell behind inside opening eight minutes but rallied back to not only equalise but also nearly clinch all three points before Gougnard’s last-gasp goal saved Belgium from suffering their first defeat at the elite competition.

India takes on Canada in their next encounter on December 8, while Belgium squares off against South Africa earlier on the same day.

Hosts India fell behind to an attacking storm from the Red Lions on the opening minutes of the encounter. Those 10 blitzkrieg minutes not just fetched Belgium three consecutive corners but also a goal off the third kick.

Alexander Hendrickx placed his shot to the right of goalkeeper PR Sreejesh, who made two brilliant saves in the earlier kicks to keep India alive.

The first half ended with the same scoreline as India slowly recovered from the early whirlwind and made its way back into the contest. Their only opportunity in the opening two quarters came in the dying minutes of the second quarter when Manpreet Singh found himself in some space after receiving a lovely pass inside the opposition box. But the drag-flicker failed to keep his shot on target.

India also had a penalty corner in the same quarter from which Belgium goalkeeper Vincent Vanasch made a brilliant save to deny the hosts.

But back from the break and it seemed both sides had swapped their shirts. India were now attacking with more urgency and just nine minutes into the match Harmanpreet Singh levelled the scores from the spot. Having seen their two earlier penalty corners go for a waste, India called on Varun and his flick hit Arthur de Sloover on the goalline, earning the home team a penalty stroke.

India looked a different side from thereon pushing the World No.3 back into their own half. Belgium were forced to defend in numbers to prevent India from taking the lead but the hosts spurred by the goal snatched the momentum.

Kothajit Singh found Simranjeet right in front of goal after surging past the Belgium back-line with an overlapping run. Simranjeet Singh had little problem in finding the net for his third goal of the tournament and soon Belgium from leading 1-0 at half-time were now behind on 1-2.

Soon custodian Vincent was withdrawn for an additional field-player and with seconds remaining Gougnard found the net to decide the outcome of the match – A draw.

Belgium were relieved, India proud of successfully fighting back against 2016 Olympics silver-medallist and so the result was a deserved outcome.

India still leads Pool C with four points from two matches, the same as Belgium but higher on goal difference.

Nickyanka Wedding: The Baaraat is waiting for Dulha Nick to make an entry