Home > Entertainment > Makers of Housefull 4 released the latest poster, ahead of the song release

Makers of Housefull 4 released the latest poster, ahead of the song release 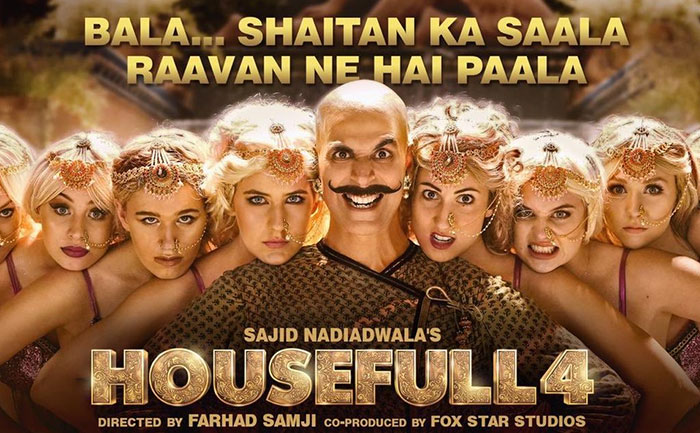 After sharing the eccentric teaser of the upcoming song Shaitan Ka Saala, the makers shared the latest poster of Housefull 4 featuring Akshay Kumar with a lot of beautiful girls around.

Sharing the poster makers took to their social media and shared, “Presenting to y’all all the shades of our 14th Century Ravaan Urf #ShaitanKaSaala Urf BALA👺 Song out today!”

‘Housefull 4’ is presented and produced by Sajid Nadiadwala’s Nadiadwala Grandson Entertainment and co-produced by Fox Star Studios, directed by Farhad Samji slated to release on Diwali 2019.

On the work front, Akshay Kumar also has Karan Johar’s ‘Good News’. The movie also features Kareena Kapoor, Diljit Dosanjh and Kiara Advani. He will also be seen in Rohit Shetty’s cop drama ‘Sooryavanshi’. The Khiladi will be sharing screen space with Katrina Kaif after a long hiatus. Akshay will be seen in supernatural drama ‘Laxmmi Bomb’ too.