How To Prevent Malaria: Tips And Tricks To Follow

Mosquito-borne diseases such as malaria witness a sharp rise in the monsoon season. Here are some tips you must follow for your safety. 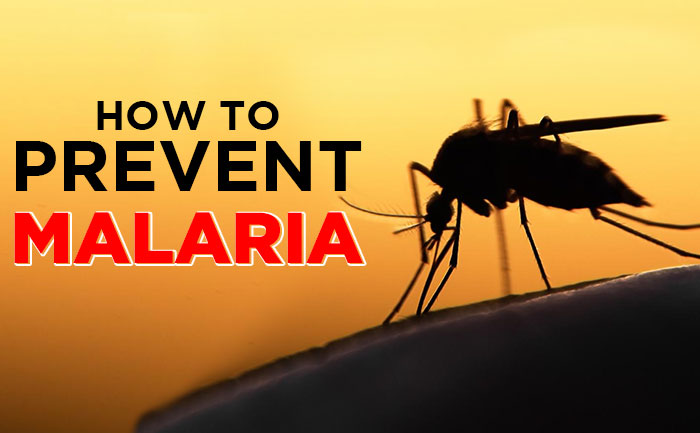 Malaria is a mosquito-borne infectious disease that affects humans and other animals. Malaria causes symptoms that typically include fever, tiredness, vomiting, and headaches. In severe cases, it can cause yellow skin, seizures, coma, or death. Mosquito-borne diseases such as malaria witness a sharp rise in the monsoon season. Symptoms usually begin ten to fifteen days after being bitten by an infected mosquito.

During the monsoon season, stagnant water and rainwater pools act as a breeding ground for mosquitoes and the hot and humid climate also increases the chance of transmission of disease. The disease is most common in tropical and subtropical climates (hot and humid) where the parasites can live and are generally active. The risk of disease can be reduced by preventing mosquito bites through the use of mosquito nets and insect repellents or with mosquito-control measures such as spraying insecticides and draining standing water.

Malaria is caused by single-celled microorganisms of the Plasmodium group. The disease is widespread in the tropical and subtropical regions that exist in a broadband around the equator. This includes much of sub-Saharan Africa, Asia, and Latin America.

Plasmodium Ovale is a species of parasitic protozoa that causes tertian malaria in humans. It is one of several species of Plasmodium parasites that infect humans including Plasmodium falciparum and Plasmodium vivax which are responsible for the most malarial infections.

Plasmodium vivax is a protozoal parasite and a human pathogen. This parasite is the most frequent and widely distributed cause of recurring malaria.

Plasmodium malariae is a parasitic protozoan that causes malaria in humans. It is one of several species of Plasmodium parasites that infect other organisms as pathogens, also including Plasmodium falciparum and Plasmodium vivax, responsible for the most malarial infections.

Plasmodium knowlesi is a parasite that causes malaria in humans and other primates. It is found throughout Southeast Asia and is the most common cause of human malaria in Malaysia. Like other Plasmodium species, P. knowlesi has a life cycle that requires infection of both a mosquito and a warm-blooded host.

Plasmodium falciparum is a unicellular protozoan parasite of humans and the deadliest species of Plasmodium that causes malaria in humans. The parasite is transmitted through the bite of a female Anopheles mosquito and causes the disease’s most dangerous form, falciparum malaria.

The signs and symptoms of malaria typically begin 8–25 days following infection but may occur later in those who have taken antimalarial medications as prevention. Initial manifestations of the disease—common to all malaria species—are similar to flu-like symptoms, and can resemble other conditions such as sepsis, gastroenteritis, and viral diseases.

An insecticide-treated mosquito net also kills or keeps away other nuisance insects – cockroaches, bedbugs, houseflies, fleas, etc. The Insecticide Treated Bednets (ITNs) or Long-Lasting Impregnated Bednets (LLINs) provide better and effective protection by keeping away mosquitoes as well as killing them. The insecticides also repel mosquitoes, reducing the number that enters the house and attempts to feed on people inside.

As its name implies, IRS involves coating the walls and other surfaces of a house with a residual insecticide.
Spraying with a residual insecticide inside houses and buildings can provide highly effective control of malaria. The insecticide lasts for at least four months, killing mosquitoes that land on them. Indoor residual spraying is one of the primary vector control interventions for reducing and interrupting malaria transmission and one of the most effective methods.

A healthy atmosphere is very important for a person to be healthy. The surroundings should be clean so you can breathe clean, healthy air. Ensuring that your home is mopped with a strong disinfectant every day is the first step to combat malaria at home. Use disinfectants for cleaning your house and toilets. Use mosquito repellents while sleeping. If you are allergic to them, you can use mosquito nets to avoid being bitten by a mosquito.

The market is filled with tools and mosquito repellent products to kill or get rid of mosquitoes. But most of the insecticides which are available on the market are believed to contain high chemical agents which can cause allergies and skin infections. Mosquito repellents come in a variety of formulas and some naturally provide a bit more protection than others.

ALSO READ: How To Make Dishes With Bread: 5 Easy Recipes To Try At Home