Home > Entertainment > Bollywood > Hrithik Roshan Proves That He Is #DaddyCool To His Kids; Here’s How Tiger Shroff Reacts

Hrithik Roshan Proves That He Is #DaddyCool To His Kids; Here’s How Tiger Shroff Reacts

Hrithik Roshan Calls Himself #DaddyCool After Winning A Cycle Race With His Kids. Tiger Shroff Appreciated The Stars Efforts Hrithik Rosha surely known how to win million hearts. The star who is currently making buzz for his film Fighter, was seen winning a cycling race with his kids. He calls himself the daddy cool after winning the race with his kids. His War co-star, Tiger Shroff reacts to the viral video on Instagram.

Hrithik Rosha is one such star who never fails to spend quality time with his kids. Most recently, he was seen taking his kids for a movie. Recently, he also went on for cycling with two of his kids, Hridhaan and Hrehaan. The handsome hunk can be seen reacting to a loud music, as he rides on cycle in the backdrop of greenery. He soon wins the race effortlessly and leaves his kids behind. In the caption of his post, he calls himself #DaddyCool.

Celebs including Hrithik’s father reacted to this video post in the comments section. Tiger Shroff commented with emojis of smile, fire and clapping. 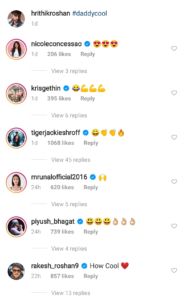 Tiger Shroff and Hrithik Roshan share a warm of friendship and the duo was seen in Siddharth Anand’s directorial, War. Time and again, the two of them never fail to acknowledge each other.

On the work fronts, Hrithik Roshan recently announced a film with Deepika Padukone, titled as Fighter. This action thriller will mark the actors third collaboration with director, Siddharth Anand. Apparently, they were planning to execute this film way before War, however, they are now gearing up take it on floor. The makers are reportedly investing a whopping budget of Rs. 250 crore in the making.

Also Read: Hrithik Roshan And Deepika Padukone Starrer Fighter To Be Made With THIS Whopping Budget?

Beyonce’s daughter Blue Ivy shows off her moves in THIS dance video; Watch