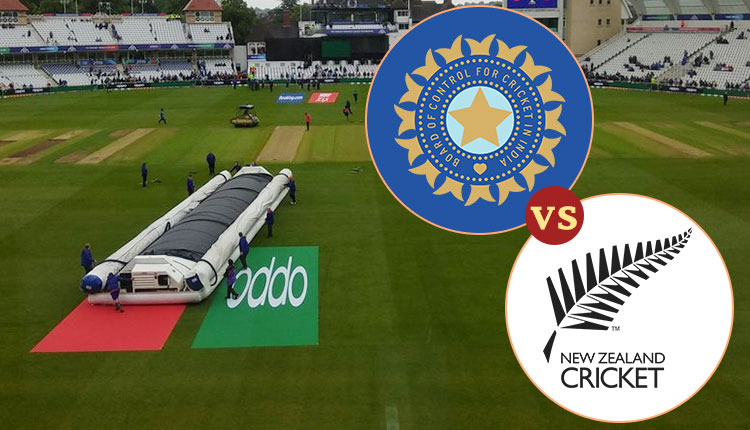 In today’s ICC World Cup match, India will face New Zealand at Trent Bridge, Nottingham today. The toss of Indian vs New Zealand has been delayed due to heavy rain in Nottingham. You can check out the live coverage of India vs New Zealand match here. It is to be noted that both the teams have not lost a single match in the tournament as of now and would make all possible effort to continue the winning streak.

Shikar Dhawan, who would not play the match due to a thumb injury, KL Rahul is likely to go up and open the innings on India’s behalf with Rohit Sharma. Similar to earlier match the weather at Trent Bridge does not look good and it has started to drizzle.

Prior to the India vs New Zealand match, there have been three matches have been cancelled due to rain — an unwanted record in the history of the 50-over event. Due to bad weather, the match has not started yet. As matches are getting washed out leading to frustration for fans and teams. Defending themselves, ICC said that they do not have any reserves days.

Well, the rain has got heavier and the covers are on #CWC19 pic.twitter.com/8WYSK1Or4J

“We put men on the moon so why can’t we have a reserve day?” Bangladesh coach Steve Rhodes said in frustration.

“I know that it would have been difficult, but we have got quite a lot of time in between games, and if we have got to travel a day later, then so be it.” he added.

ICC chief executive David Richardson said, “Factoring in a reserve day for every match would significantly increase the length of the tournament and, practically, would be extremely complex to deliver.”

“It would impact pitch preparation, team recovery and travel days, accommodation and venue availability, tournament staffing, volunteer and match officials’ availability, broadcast logistics and very importantly the spectators, who in some instances have travelled hours to be at the game,” Richardson said.

“Up to 1200 people are on site to deliver a match and everything associated with it including getting it broadcast and a proportion of them are moving around the country so reserve days in the group stage would require a significant uplift in the number of staff,” he added. “There is also no guarantee that the reserve day would be free from rain either.”

Looking at the weather, Harsha Bhogle tweeted: “Oh dear! Was looking good and here comes the drizzle again. Big issue here is even if stops there is neither sunlight nor a breeze to dry the outfield. Also, the covers cover the square and not the entire ground.”

Oh dear! Was looking good and here comes the drizzle again. Big issue here is even if stops there is neither sunlight nor a breeze to dry the outfield. Also, the covers cover the square and not the entire ground.

Where will the match between India vs New Zealand be played?

India will take on New Zealand on 13 June 2019 at Trent Bridge, Nottingham.

What time does India vs New Zealand match begin?

India vs New Zealand match is supposed to begin at 3 pm IST, with the toss scheduled at 2.30 pm IST but the match could not start at the mentioned time due to heavy rains at the venue.

Which TV channels will broadcast India vs New Zealand match?

The match will be live telecast on the Star Sports network in HD format. You can also watch India vs New Zealand match live on Hotstar. You can also catch the live score and updates from here.