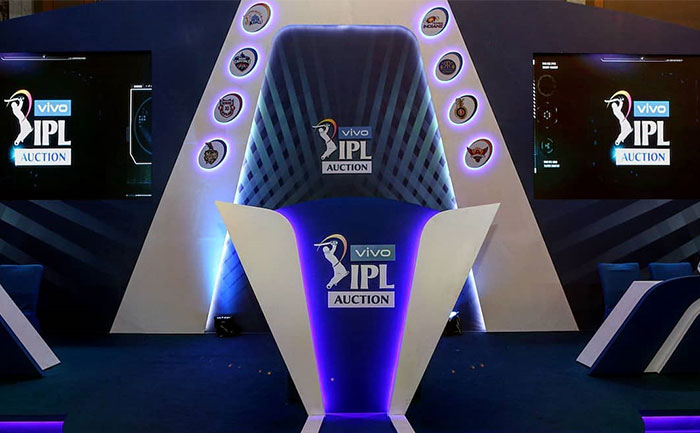 The IPL 2020 Auctions are well underway and the bid wars have started as teams try to beef up their rosters with the best talents available. Here are the updates to the IPL 2020 auctions in order of occurrence.

Chris Lynn was quickly gobbled up by the Mumbai Indians for the base price of Rs 2 crores with no contest. It was surprising that no other teams bid for the hard-hitting Australian but with a limited amount of purse left perhaps it is understandable.

Kolkata Knight Riders went into a bidding war with Delhi Capitals over England’s Eoin Morgan. In the end, Morgan was snatched up by KKR for Rs 5.25 crores. Robin Uthappa became the first acquisition of the day for Rajasthan Royals at Rs 3 crore. However, India’s Hanuma Vihari and Cheteshwar Pujara went unsold at their base price of 50 lakhs each.

Jason Roy, who was an essential element to England’s victory at the 2019 World Cup, went to the Delhi Capitals for his base price of Rs 1.5 crore. In contrast, Aaron Finch heated things up between KKR and Royal Challengers Bangalore as they went into a bidding war over him. In the end, it was RCB who won Aaron Finch for Rs 4.40 crore.

This ended the first set of capped batsmen, bring the bidding to the second set of capped all-rounders. Glenn Maxwell kicked things off with a bang, initiating a bidding contest between Delhi Capitals and Kings XI Punjab. After an intense back and forth, KXIP bagged Maxwell for Rs 10.75 crore which was way over his Rs 2 crore base price. Chris Woakes went to Delhi Capitals for his base price of Rs 1.5 crore. However, Indian all-rounder Yusuf Pathan remained unsold at Rs 1 crore in addition to Colin de Grandhomme who also went unsold at his base price of Rs 75 lakh.

It was Pat Cumming who forced teams to break the banks though. There was an intense bidding war between RCB and DC that saw the price shoot up to Rs 14.75 crore. However, KKR swooped in at the final moments to pick up Pat Cummings for a staggering Rs 15.5 crore. Pat Cummings is now the highest earner at the IPL Auction 2020. CSK recruited Sam Curran for Rs 5.5 crore after a brief bidding war with Delhi Capitals. Chris Morris did well at the IPL 2020 Auctions, with a bidding war between Bangalore and Punjab ensuing over him. In the end, RCB picked him up for Rs 10 crore. The first round of auctions closed out with Stuart Binny remaining unsold at his base price of Rs 50 lakh.

Set 4 of capped bowlers, didn’t start with much fanfare either. Mohit Sharma and Dale Steyn go unsold for their base prices of Rs 50 lakhs and Rs 2 crore respectively. Jaydev Unadkat sparked a bidding war between KXIP and RR with Rajasthan Royals getting Jaydev for Rs 3 crores. Nathan Coulter-Nile went to join the Mumbai Indians after a bidding war with CSK saw his price go up to 8 crores. Tim Southee and Andrew Tye had no luck and went unsold for their base price of of Rs 1 crore each.

However, Lalit Yadav joined DC, Shahbaz Ahmed went to RCB with Nikhil Naik was picked up by KKR for their base price of Rs 20 lakh in the IPL 2020 Auctions. Sheldon Cottrell was auctioned to KXIP for Rs 8.5 crore after a back and forth with Delhi Capitals and RR. In addition, Ipl 2020 Auctions also saw some tug action over Piyush Chawla between KXIP and CSK. In the end, CSK won out with Piyush Chawla being sold for 6.75 crores. However, Ish Sodhi (Rs 75 lakh), Adam Zampa (Rs 1.50 crore), Hayden Walsh (Rs 50 lakh) and Zahir Khan (Rs 50 lakh) all went unsold.

Similarly, Manjot Kalra, Rohan Kadan and Harpreet Singh also went unsold. KKR added yet another acquisition to their team with Rahul Tripathi at Rs 60 lakh.  However, Sunrisers Hyderabad made its first acquisition at the IPL 2020 Auctions with Virat Singh for Rs 1.90 crore after a tussle with KXIP. SRH returned for Priyam Garg, getting him for Rs 1.90 crore after another bidding war with KXIP.

After back-to-back disappointments, KXIP acquired Deepak Hooda for Rs 50 Lakhs. Varun Chakravarthy went for way above his base price of Rs 30 lakhs after KKR and RCB went toe-to-toe. He was ultimately sold to KKR for Rs 4 crore. Indian Yashasvi Jaiswal made quite an impression on RR who bought him for Rs 2.40 crore. Daniel Sams, Pawan Deshpande and Shahrukh Khan all go unsold. After that, RR made two back to back acquisitions in the form of Anuj Rawat (80 lakh) and 17 year old Yashasvi Jaiswal. In contrast, Kedar Devdhar, K S Bharat, Prabhsimran Singh, Ankush Bains, and Vishnu Vinod all go unsold.

The ninth set of uncapped fast bowlers at the IPL 2020 Auctions kicked off with Akash Singh being sold to RR for Rs 20 lakh. Kulwant Khejroliya and Tushar Deshpande remained unsold. Karthik Tyagi sparked a surprise bidding frenzy between KXIP and RR taking his price way above his base value of just Rs. 20 lakh. Riley Meredith went unsold at the end of set 9.

The tenth set of uncapped spinners started with Ishan Porel being sold to KXIP for his base price of Rs. 20 lakh. While M Siddharth was sold to KKR for an opening bid of Rs 20 lakh K.C. Cariappa and Midhun Sudhesan went unsold. Ravi Bishnoi went for Rs 2 crore to KXIP after an intense bidding war between Punjab and Mumbai took his price up from Rs 20 lakh. Afghanistan’s 14-year-old spinner Noor Ahmad, the youngest player at the IPL 2020 Auctions, went unsold to end Set 10.

Above all, big names like Andile Phelukwayo, Colin Munro and Ben Cutting all went unsold. However, KXIP broke the trend and bagged Jimmy Neesham for his base price of Rs 50 lakh. Anrich Nortje, Barinder Sran, Mark Wood, Alzarri Joseph, and Mustafizur Rahman couldn’t buck the trend, going unsold. In the end, CSK picked up Josh Hazlewood for his base price of Rs 2 crore while bowler Adam Milne went unsold.

Chris Jordan brought some life back into the IPL 2020 Auctions as KXIP and RCB hiked the price all the way up to Rs 3 crore in comparison to his base price of 75 lakh. KXIP was the team that got Chris Jordan in the end. Oshane Thomas sold to RR for his base price of Rs 50 lakh while KKR shelled out Rs 20 lakh for Pravin Tambe. However, Sumit Kumar, Aryan Jayal, Kuldeep Sen, James Pattinson, Liam Plunkett, and Yudhvir Singh all went unsold. Tajinder Singh sold to KXIP for his base price of Rs 20 lakh and Abdul Samad joined SRH for Rs 20 lakh. West Indian pacer Kesrick Williams went unsold along with Isuru Udana, Sean Abbott, and Matt Henry.

Kane Richardson incited some excitement as he was sold to RCB for Rs 4 crore. The Rajasthan Royals wanted to acquire the bowler badly but eventually lost out to RCB. RR paid Rs 20 lakh to land bowling all-rounder Aniruddha Joshi. Meanwhile, Mumbai Indians expanded their ranks with Digvijay Deshmukh and Prince Balwant Rai for Rs 20 lakh each. SRH paid Rs 20 lakh for Sanjay Yadav. Colin de Grandhomme came back a second time in the auction and still went unsold along with Kusal Perera.

Ben Cutting didn’t find takers at the IPL 2020 Auctions and remained unsold at his base price of Rs 75 lakh. Similarly, Colin Munro at the price of Rs 1 crore didn’t get any buyers either.