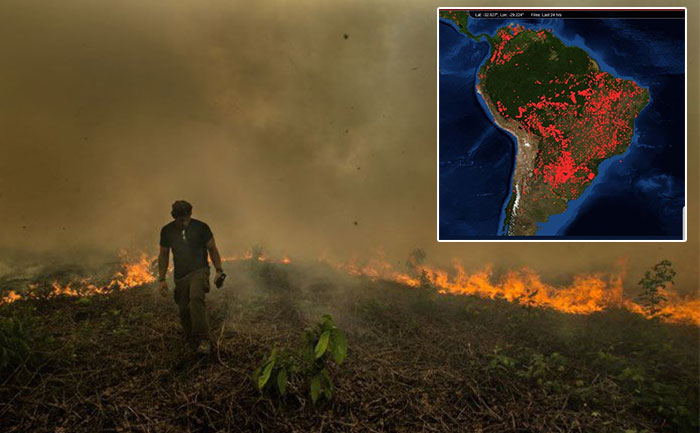 The Amazon Fire is on for many weeks without much efforts to contain it by the Brazilian Government. On the eve of the G-7 summit in Biarritz, France, world leaders decided to take action. As EU threatened trade retaliation, Brazilian president Jair Bolsonaro authorized the deployment of Brazil’s armed forces to help combat fires raging in the Amazon rainforest.

The planet’s lungs are full of smoke. pic.twitter.com/OIUFyNiAt8

Forest fires in the Brazilian Amazon, which accounts for more than half of the world’s largest rainforest(region considered the “lungs of the planet”), have surged in number by 83 percent this year. According to government data, destroying vast swathes of a vital bulwark against global climate change. Images of fires raging in the Amazon broadcast around the globe sparked protests outside Brazilian embassies from Mexico City and Lima to London and Paris. Several thousand protesters marched in Rio de Janeiro and Sao Paulo, amid growing European pressure as well as offers to help put out the fires.

Animals need you. They need you to speak up for them. You are their voice. Don’t ignore them. No words. Rescue Photo of one of the animals that threw themselves into the water, trying to save themselves from the Amazon fire. #AmazonRainforest #AmazonFires pic.twitter.com/KP7WaNIkUt

Bolsonaro, who initially accused non-governmental organizations of setting the forest on fire without providing any evidence, said in a televised address he had authorised the use of troops to fight the fires and stop illegal deforestation in the Amazon.

Neighbouring Paraguay and Bolivia are also battling separate wildfires that have devastated large areas of their rainforests. The Bolivian government took delivery of a “supertanker” aircraft to help extinguish fires that have destroyed around 7,770 square kilometres (3,000 square miles) of the eastern province of Santa Cruz for the past month.