Jungkook — a member of one of the most popular South Korean boys band BTS —  turned a year older on 1st September. On the occasion of his 22nd birthday, thousands of fans, celebrities and friends took to their social media accounts to wish Jungkook happy birthday. Among the celebrities who wished Jungkook are Justin Bieber, Nicki Minaj and others. BTS Jimin’s First Masterpiece ‘LIE’ Surpasses 80 Million Streams On Spotify!

Similar to every year, Jungkook has a special surprise for his fans this year as well. Yes, Jungkook took to Weverse on Saturday (August 31) to express his gratitude for all of the birthday love he’s been receiving. He wrote, “If our ARMYs didn’t exist, I wouldn’t be as happy as I am on a day like today.”

“I searched up all the things that you did for me; thank you so much…There really were so many,” he continued. “Honestly, that I would receive well wishes from so many people (from my beloved ARMYs) is something that still amazes me, and sometimes doesn’t feel real,” he further added.

Jungkook said that he usually uploads a cover song on his birthday, but since he could not make one this year, he instead revealed a new short original track (sung in English) on BTS‘s Twitter.

Check out the new song here: 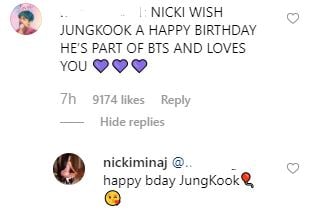 Meanwhile, Jungkook thanked all of the fans for the birthday wishes and revealed a snippet of his upcoming English-language solo song.