Earlier today, Govinda reacted to Krushna Abhishek’s recent statements about him and called it ‘thoughtless and defamatory.’ He also said that he insists on maintaining a graceful distance from his nephew and his family. Now, Krushna’s wife penned a  cryptic note for her son on social media amid Govinda and Krushna’s feud.

Kashmera took to her Instagram handle and shared a note about protecting her family, posting a photo with her son, she wrote a long caption that read as: “Life does not come with an instruction guide but it comes with a Mother and as a Mother it’s my job to protect you and make you my priority number one. As a mother it’s my job to cause you no harm and keep your best interests at heart. As a mother my heart pains to see you in pain and I feel useless that I can’t take your pain away from you. However I can take those things and people away that cause you that pain. As a mother I promise to Never let people use You for their personal agenda.”

“I promise to Never let them belittle your presence in my life. You will soon learn as you grow up that no matter how young one is Mighty People will Stoop at Nothing to Use you. But as long as I am Alive and even beyond that I will protect you from all selfishness of this world. Your Mother Kashmera Shah Sharma @krushna30 @artisingh5 @rishaabchauhaan #motherslove #mothersworld #motherknowsbest #momsunite #baby #babyboy💙 #sons #mylife #mypriority #mynumberone,” wrote Shah. 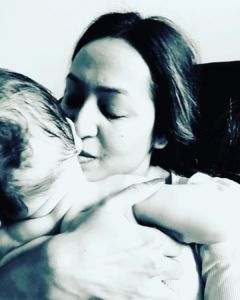 Govinda and Krushna’s relationship went sour as two years back, the Dulhe Raja’s wife Sunita took offence to Kashmera’s tweet about some “people who dance for money”. Sunita also said that Kashmera referred to Govinda, however, Krushna cleared the air and said that it was not.