Did Katrina Kaif and Vicky Kaushal secretly got engaged? Find Out

Latest buzz from B-town suggested that alleged couple, Katrina Kaif and Vicky Kaushal got engaged in a private ceremony. However, these reports turned out to be just rumors

On Wednesday (August 18), reports started making buzz on social media claiming that Katrina Kaif and Vicky Kaushal got engaged to each other in a private ceremony. While it appeared to be true, these were apparently just the rumors. Time and again, Vicky and Kat were speculated to be dating, however, none of them have officially commented anything about it as yet. Today, the Roka reported made headlines. And now people close to them confirmed that these were indeed just rumors having no truth at all.

Renowned photographer, Viral Bhayani had also shared about these rumors on his official Instagram handle. Sharing a picture of Kat and Vicky, he captioned his (now deleted) post, “Hmmmm there are engagement rumours that they had a roka ceremony. Will wait for an official announcement till then it remains a rumour.” According to a report by Bollywood Bubble, a source close to Vicky has confirmed that he is not engaged to Katrina. The source also claimed these reports to be just baseless rumors. 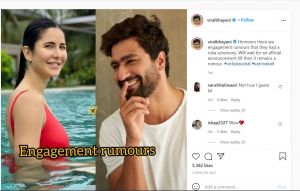 For the unversed, Vicky Kaushal and Katrina Kaif were recently spotted at the screening of Sidharth Malhotra and Kiara Advani starrer Shershaah. Apparently, since that day the rumors started surfing on the internet portals.

Reportedly, Katrina Kaif would be jetted off to Russia to kickstart shootings for Tiger 3 alongside Salman Khan. The cast and crew were reportedly prepping to begin the new schedule for the Yash Raj Production backed film. On the other side, Vicky has been prepping for the release of Sardar Udham Singh and Takht.

Also Read:  Tiger 3: Salman Khan And Katrina Kaif To Jet Off To Russia