Home > Entertainment > Television > KBC 11: Sudha Murty Gifts Big B a chadar that was stitched by the Devadasis women

KBC 11: Sudha Murty Gifts Big B a chadar that was stitched by the Devadasis women 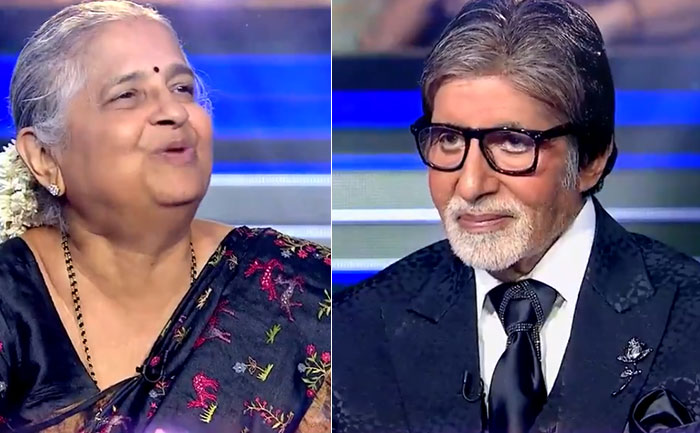 Introducing Sudha Murthy, Bachchan told the audience that she was the first female engineer from Hubli, Karnataka, and faced a lot of struggles to establish her career.

In the latest KBC promo, Murthy shared that in spite of her resistance from her family, she chose to pursue her education. Further, she said about how she fought all the stereotypes.

She fought against all social stereotypes. Meet our #KBCKaramveer #SudhaMurthy this Friday at 9 PM and know how she reformed thousands of underprivileged lives. @SrBachchan pic.twitter.com/NtvJEQ1yM3

Murthy also spoke about being a movie buff. She said, “I am a movie buff so I am really happy that I got to meet a great actor like Amitabh Bachchan. Winning or not winning is not a big deal but our main motive is to reach out people about the work we do.”

The Infosys chief also gifted Mr. Bachchan a chadar made by Devadasis. Sharing his experience, he took to his blog and wrote, “A chaadar stitched by the women devdasis’ whom Sudha ji has given a new life to… away from the old tradition where they were relegated to discrimination… and a gift for me to ever remember and be in awe of her tremendous work.”

On the work front, Bachchan will next be seen in Ayan Mukerji’s Brahmastra, opposite Ranbir Kapoor and Alia Bhatt and will also be seen with Ayushmann Khurrana for Shoojit Sarkar’s Gulabo Sitabo.