Khalid Opens Up About His Collaboration With BTS Boyband – Watch 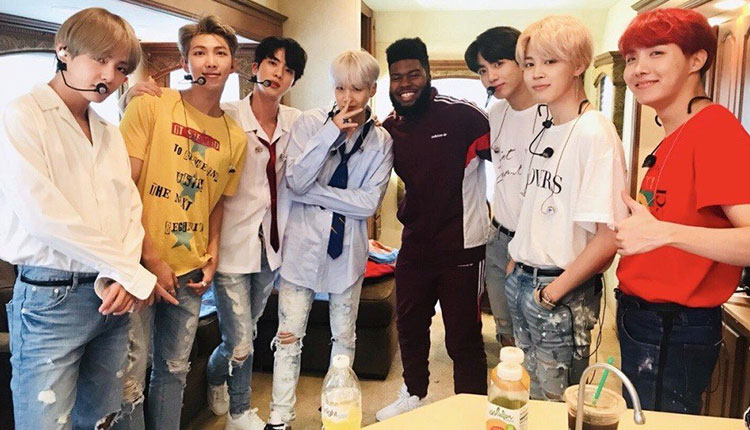 Khalid — American Singer and songwriter is likely to join hand with popular South Korean Boyband Bangtan Boys (BTS) in future. Speaking with Good Morning Britain, Khalid has confirmed his collaboration with BTS saying that there is definitely talks of working on a collaboration. The 21-year old singer said, “I feel like that’d be awesome. I just gotta get to it.”

It is to be noted that the news of Khalid and BTS collaboration comes days after American singer Ariana Grande has given us hints that she might collaborate with BTS soon. The sources told Hollywood Life, “Since both Ariana and BTS are always working on music and are in the studio, it is only a matter of time that they do something, sometime in between their tours they will try to get something done.”

Confirming from BTS side, One of the members of BTS RM, said that they would be collaborating on a track together in a recent interview.

BTS seems to be on a collaboration spree as they have recently collaborated with Halsey for their smash hit ‘Boy With Luv’, and Grammy Award-winning artist Ed Sheeran for another song — ‘Make It Right’ — on their latest album, MAP OF THE SOUL: PERSONA. BTS’ Jungkook Attends Ariana Grande’s Concert In LA

Confirming his collaboration with BTS, Khalid said, “We’re mutual fans of each other.”  “Just because you don’t speak the same language as each other, doesn’t mean you can’t necessarily have a friendship,” he added.

He went on to say, “I feel like they’re just exceptional, they’re extraordinary, and they deserve every single thing that’s happening to them right now.”

‘Just because you don’t speak the same language as each other, doesn’t mean you can’t have a friendship.’