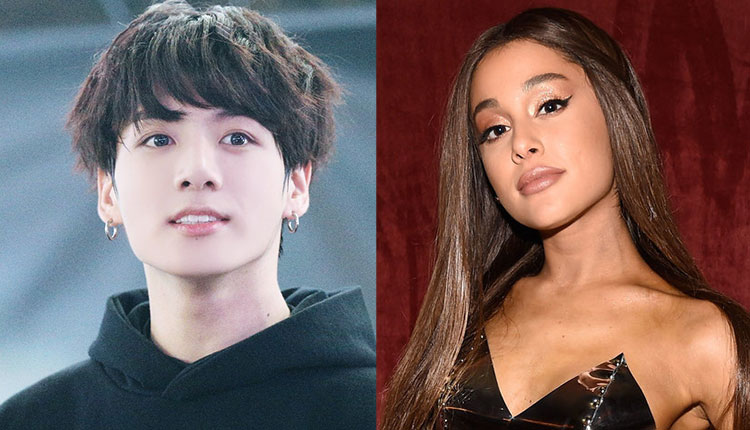 The youngest member of the Bangton Boys (BTS), Jungkook seems to have had an amazing time with the world’s most followed female celebrity on Instagram, Ariana Grande. Yes, after taking the stage on fire at the Billboard Music Award 2019 last week, Jungkook was recently spotted attending Ariana Grande’s Sweetener Show in Los Angeles.

The 21-year-old BTS band mate Jungkook checked out the 25-year-old singer’s latest Sweetener World Tour stop on Monday night (May 6) at the Staples Center. At the event, BTS band mate clicked a selfie with Grande. He took to Twitter and posted a picture of himself with an adorable message dedicated to ‘Thank U, Next’ singer.

He wrote on Twitter: “I felt and learned a lot after seeing her stage. I am really challenged by her stage and will try harder! #ArianaGrande.” Gaon Weekly Charts: BTS And NU’EST Both Achieve Triple Crowns THIS Week

I felt and learned a lot after seeing her stage. I am really challenged by her stage and will try harder!#ArianaGrande pic.twitter.com/Jj0xREEK2W

The moment he posted the picture on the microblogging site, fans started pouring messages and praising the singer for his kind words.

On the other hand, Grande took to Instagram and thanked Jungkook for stopping by her show, sharing a photo of the two together backstage.

screaming. 🖤 thank u soooooo much for coming to my show, Jungkook. it meant so much. love u sm 🌬

Sharing the picture on the photo-video sharing app, she wrote a caption: “Screaming. 🖤 thank u soooooo much for coming to my show, Jungkook,” Grande wrote. “It meant so much. love u sm.”

BTS and Halsey was in Los Angeles last week and seen doing live performances of “Boy With Luv” together. And the passion was present for Halsey and the boys—V, Jungkook, Jimin, Suga, Jin, RM, and J-Hope—in every beat. Apart from Billboard Music Awards 2019, they also had two concerts at the famous Rose Bowl in Pasadena, California, on Saturday and Sunday night.