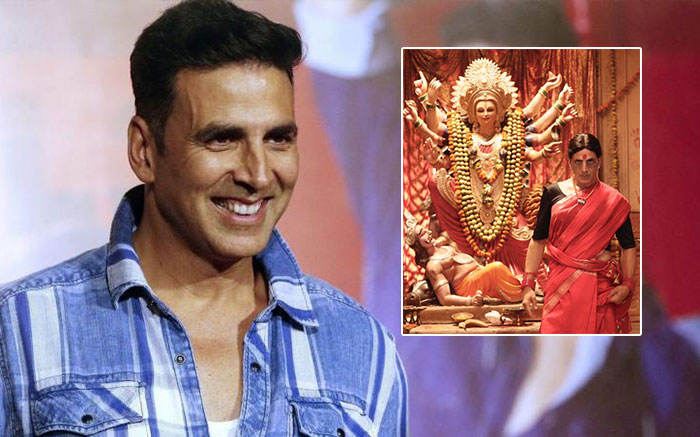 Bollywood superstar Akshay Kumar after the super success of Mission Mangal is gearing for his next Housefull 4. The Khiladi also has cop drama Sooryavanshi and Laxxmi Bomb in his kitty. On the auspicious occasion of Navratri  Akshay Kumar has shared the first look of his upcoming release Laxmmi Bomb. The actor is looking intimidating in his sari-clad look.

Check out his intense avatar that will send a chill down your spine here:

Navratri is about bowing to the inner goddess and celebrating your limitless strength.On this auspicious occasion,I am sharing with you my look as Laxmmi.A character I am both excited and nervous about… but then life begins at the end of our comfort zone…isn’t it? #LaxmmiBomb pic.twitter.com/TmL9U1OXdk

Akshay Kumar is seen standing next to a Durga idol with Mahishasura at her feet. He is dressed in a Red Sari with a huge Red Bindi but it is his intense fierce look that is chilling.

Laxmmi Bomb is the Hindi remake of horror comedy Tamil hit Kanchana. The film features Kiara Advani and Akshay Kumar in the lead. It is being helmed by filmmaker Raghava Lawrence, who had also directed the original movie.

The film’s plot revolves around a man who is afraid of all things supernatural. But is forced to confront his fear as his body gets possessed by the spirit of a transgender called Laxmmi.

Laxmmi Bomb is being produced by Cape of Good Films in association with Shabinaa Entertainment & Tusshar Entertainment House. It is scheduled to release on May 22, 2020.

Also Read:  Laxmmi Bomb: Raghava Lawrence back on board in Akshay Kumar starrer