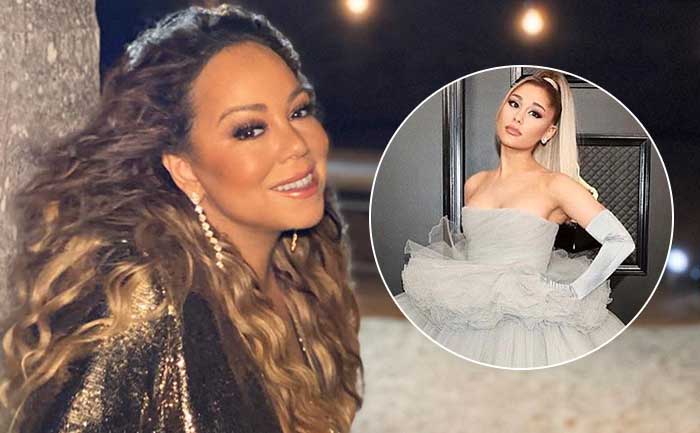 Ariana Grande recently shared a  video of her belting out high notes to rival that of Songbird Supreme Mariah Carey. The two songstresses have become good friends over the years. They recently exchanged a joke in the comments section of a photo Grande posted to Instagram. Ariana Grande had posted a black-and-white snapshot of herself and Jim Carrey from her upcoming appearance on his show Kidding and Mariah Carey responded saying: ‘With my cousin Jim who insists on misspelling our last name.’ 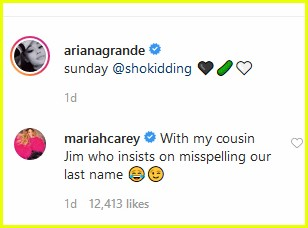 The 7 Rings star responded with ‘My two favorites ever.’

Ariana appeared in this week’s Kidding episode where she was a guest on Mr. Pickles’ Puppet Time named Piccola Grande, the Pickle Fairy of Hope. Kidding is currently in its second season. It chronicles the struggles of children’s show star Mr. Pickles, played by The Mask actor Jim Carrey. The conversation between the two icons started last March when Ariana Grande wished Mariah Carey a Happy Birthday. Ariana posted a photo of Carey with the caption, ‘Happiest anniversary queen of everything. Loved u then, love u now, love u tomorrow.’

The All I Want For Christmas star reposted the message to her own story, writing: ‘Thank you dahhhhling!!’

Ariana has recently been making waves with the news that she might be thinking of collaborating with South Korean boy band BTS. The rumors only gained traction when BTS said they loved Grande and would love to collaborate. Mariah Carey’s Christmas anthem All I Want For Christmas hit No. 1 on the Billboard Hot 100 for the first time last year.