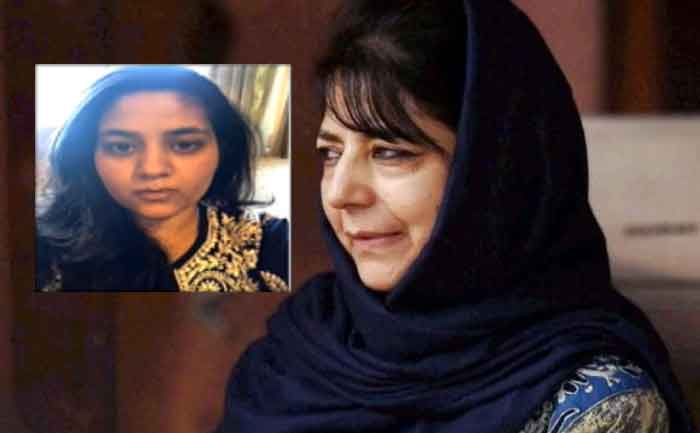 The daughter of former Chief Minister of Jammu and Kashmir Mehbooba Mufti, Iltija Mufti has written a letter to Union Home Minister Amit Shah over the restriction imposed on the people of Kashmiris. In her letter, she stated that at a time when the entire country was celebrating the 73rd independence Day, people in Kashmir Valley were being caged like animals and deprives of basic human rights.

In her letter to Amit Shah, Iltija Mufti also said that visitors were not allowed to visit her. She called it “odd” since she did not belong to any political party. Iltija said that she was informed by security personnel that she had been detained for interviews to media and was “threatened with dire consequences”.

“I’d be most obliged if you could kindly throw light on the laws under which I’ve been detained and for how long,” Iltija Mufti told Amit Shah.

“For the world’s largest democracy, doesn’t a citizen not have a right to speak up in the face of unimaginable repression… It’s a tragic irony that I am being treated like a war criminal for stating the inconvenient truth,” Iltija Mufti stated.

“Do I need to seek legal recourse?” Iltija Mufti concluded saying it was “suffocating and humiliating” to be treated in this manner “for stating the inconvenient truth”. At the end of her letter, she said that she is unable to pos any letter as Postal services in the Kashmir Valley are suspended.

Notably, Kashmir remained shut for the 12th consecutive day on Friday, even as the authorities relaxed restrictions on the movement of people in Srinagar.

“Restrictions on the movement of people have been eased in most parts of the Valley. The situation so far has remained peaceful,” a senior official of the state administration said. According to NDTV, schools, colleges and government offices in Kashmir are likely to re-open from Monday.

The reports further stated that the restrictions in Kashmir will be lifted over the next few days, the government told the Supreme Court today in response to a petition that sought immediate removal of the restrictions on the media amid a lockdown that has been in place there for more than 10 days.

“I have read in the media report that restrictions on landline and broadline are likely to be removed by the evening today,” Chief Justice of India Ranjan Gogoi said.

Also Read: Kashmir Crisis: What Is Article 370? How Does It Facilitate The People Of Kashmir?