Mukesh Ambani and Nita Ambani publicly for the first time introduced Radhika Merchant as their family member during an event. 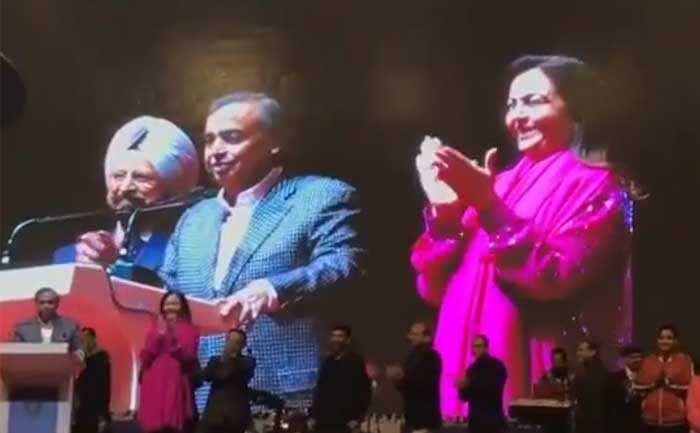 As part of their annual ritual, and to welcome 2020 with open arms, the ‘annual Reliance Family Day’ took place recently. The representatives of Reliance Group were gathered at the Ambani’s property in Jamnagar, Gujarat.

Purab Kohli And His Family Had Tested Positive For…

At the occasion, Mukesh Ambani and Nita Ambani were joined by their twins, Radhika Merchant, who’s dating Anant Ambani, Isha Ambani and Akash Ambani, along with their mates, Anand Piramal and Shloka Mehta, respectively. Mukesh and Nita Ambani have often treated Radhika with no less warmth than their daughter-in-law Shloka. Often, she has accompanied Nita Ambani to public events on frequent occasions.

A post shared by Shloka Ambani Encyclopedia (@shlokaakashambani_fp) on Jan 4, 2020 at 12:51am PST

In a video, Mukesh and Nita Ambani can be seen addressing the employees of Reliance Industries. Greeting his employees he said, “To my dearest Reliance family in Jamnagar. A very Happy New Year to all of you. <em “>I’ve always considered the entire Reliance family as my family and 2019 was a special year for us we added to our family. Akash and Isha got both married.”

Later, Ambani asked his kids to come forward on the stage. “Akash and Shloka please come and wish everybody,” called Isha and her husband Anand Piramal, “Isha and Anand. Come here Isha. Next to me. Come both of you. Isha come on.”  But the loudest applause was held for Anant and Radhika as Mukesh Ambani called their names.

The event was also graced by some Bollywood personalities including Aamir Khan, Riteish Deshmukh, musicians Salim and Suleman Merchant. The musician duo also took to the stage to perform on songs such as Shukran Allah and Tauba Tauba.

Kanika Kapoor Will Be Interrogated By Lucknow Police After…

Scoop to Batty-10 Most Expensive And Cute Beanie Babies