Home > Entertainment > Nach Baliye 9: The Winner will star in a dance number in Dabangg 3

Nach Baliye 9: The Winner will star in a dance number in Dabangg 3

The female winner of Salman Khan's Nach Baliye 9 will get a chance to feature in a dance number in Dabangg 3. 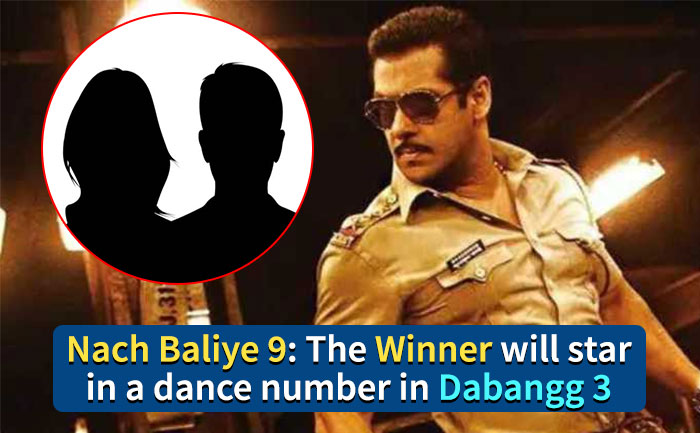 Superstar Salman Khan‘s production ‘Nach Baliye 9’ is one of the most loved reality show on Indian Television. Ever since the show kickstarted the contestants are winning hearts with their performances. Happy with the response and the hard work of the contestants the superstar has decided to reward the contestants. The winner of this season will get a chance to be a part of a dance number in Dabangg 3.

As reported by a source to Pinkvilla, “Salman and his team are keeping a close watch on the show, as the winner will join him in the special song. He has already discussed the plans with his team. The makers have planned to shoot the major parts before September end.”

Participants of the show are falling sick or getting injured. This has led to one or the other participating Jodi to opt-out of performing. Therefore the superstar and the makers have organised a Koran reading session on the sets of Nach Baliye. This is to ward off the unwelcoming situations.

As reported by sources to News 18, “The makers brought in Madrasa students, to read out the Quran on sets to ward off ill omen. They conducted this to ensure that going forward, the dance journey for the contestants turns out to be a smooth sailing one, devoid of any injuries whatsoever.”

On the work front, Salman Khan is busy with the shoot of Dabangg 3. The Prabhu Deva directorial brings back the much-loved cop Chulbul Panday. Sonakshi Sinha will be seen as Rajjo and Arbaaz Khan as Makhhi Singh. The movie has South star Sudeep playing the antagonist.

Also Read: Nach Baliye 9: Keith-Rochelle is the first jodi to be eliminated