Here's everything you should know about Narcos Mexico 3. 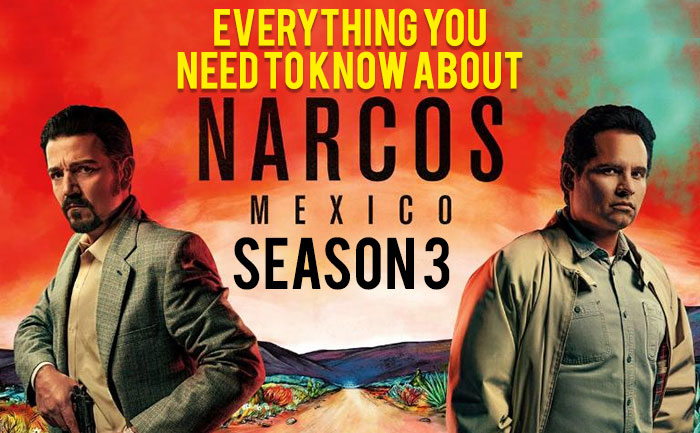 In this article, we will talk about everything related to Narcos Mexico season 3 like its trailer, cast, release date, plot and more.

Here’s Everything You Should Know About Narcos Mexico 3

When is Narcos Mexico Season 3 out on Netflix?

There is no official statement made as of now pertaining to Narcos Mexico 3. Netflix has not confirmed whether the popular crime drama will be renewed or not. However, if you have been waiting for the third season of Narcos Mexico, do not be panic, Netflix usually takes two to three months of time after releasing the latest season, to announce the upcoming season.

When it comes to Narcos Mexico 3 release date, it is not out yet. The streaming giant announced its second season on 15 December 2018, almost a month after the first season was dropped while it was started streaming on February 13, 2020.

If you look at the gap, Netflix took 14 months to complete the shooting of season 2. If Netflix follows the same pattern, it is likely that Season 4 of Narcos Mexico will be out in May 2021.

What will happen in Narcos Mexico 3?

The second season of Narcos Mexico ended with a furious Felix Gallardo’s (played by Diego Luna) downfall as the drug kingpin was arrested. The show also sets up Amado Carrillo Fuentes’ (José María Yazpik) rise to power in the drug underworld of Mexico.

It was shown in the final scenes as DEA Walt Breslin (Scoot McNairy) visits Gallardo in prison. During the conversation, Gallardo can be heard saying that power will be shifted from Guadalajara to Juarez. The upcoming season of Narcos Mexico may explore a lot of things about El Chapo (Alejandro Edda) who has played a small role in the series as of now.

How did Narcos: Mexico season 2 end?

In the second season of Narcos: Mexico, we saw Felix Gallardo’s (Diego Luna) reign as the supreme drug lord of Mexico ended, with the federation of cartels he would work so hard to unite (as seen in the first season) deciding to make their own way and turn their backs on him.

The season 2 ended with a bang, albeit a quiet one. There’s no gigantic shootout or car bombing. It boils down to a jailhouse showdown between Félix and Walt, who finally come face-to-face. The scene is absolutely riveting, just two phenomenal actors sitting across from each other, having a conversation.

Who is in the cast of Narcos Mexico 3?

Of the main cast members who have appeared in Narcos: Mexico, a return for Diego Luna as Felix Gallardo is unlikely to return in season 3. Tenoch Huerta, Joaquin Cosio, and Teresa Ruiz are all incarcerated by the end of season two, will be returning to the series questionable, at least in major roles.

It is expected that Scoot McNairy will reprise his character of DEA agent Walt Breslin. It is also likely that Flavio Medina will be making his comeback in season 3 as Juan Abrego of the Gulf Cartel.

Is there a trailer of Narcos Mexico Season 3?

Thelivemirror.com will update this story as soon anything is released about the upcoming season of Narcos Mexico.