Neeraj Chopra made India proud winning the gold medal at Tokyo Olympics. He recently graced Dance Plus 6 and played cupid for Shakti Mohan and Raghav Juyal on the show 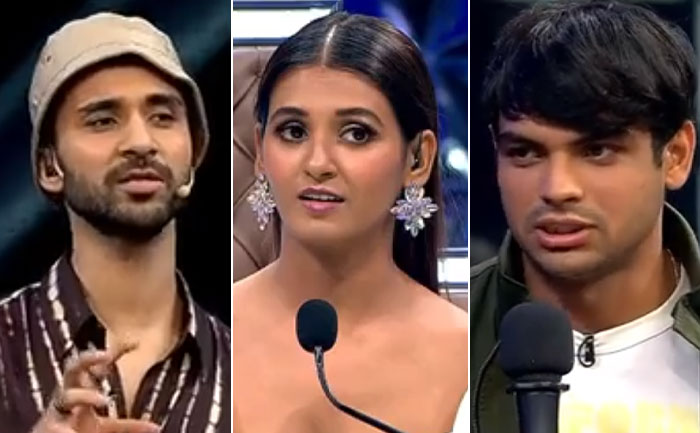 After clinching the gold medal at the Tokyo Olympics in Javelin throw, Neeraj Chopra has been on a promotional spree. He recently shot for his first ad video. He also graced the dance reality show- Dance Plus 6. Several Behind-the-scene videos and the glimpses of his interaction with the show judges goes viral on the internet. Neeraj, who is known to be the national crush turns the cupid for Shakti Mohan and Raghav Juyal.

Shakti started off by asking Neeraj Chopra to propose to her, so he can show Raghav how it is actually done. After appearing little hesitant, Neeraj started praising Raghav. Shakti then interrupts him to say, “Aise thodi na propose karte hai? Haath pakadte hai (Is this the way to propose? You should hold my hand before saying anything).” Neeraj appeared blushing as he attempt to play a cupid between Shakti and Raghav. He tells Shakti, “Raghav bhai bohut achhe hai, aap unse baat karo (Raghav is a very nice guy, you should talk to him).”

Check out the heartmelting video :

Shakti was not persuaded by Raghav. She confesses, he (Raghav) couldn’t impress her for the last six years and how can he do it now. Neeraj was also seen flaunting his dancing skills on the show and the video is absolutely unmissable.