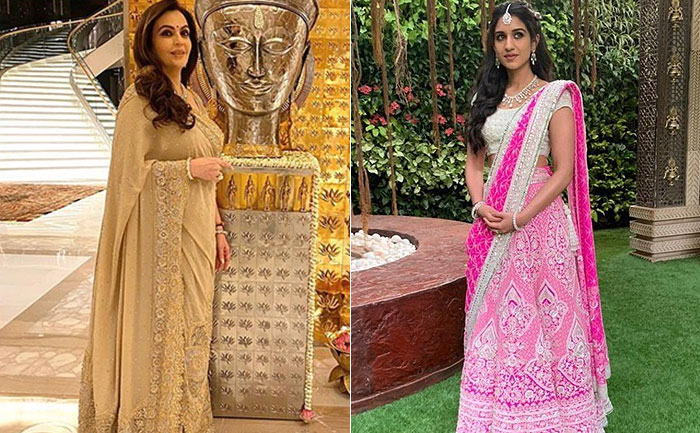 Nita Ambani and Radhika Merchant twinned in the designer dresses by duo Abu Jani and Sandeep Khosla. Meanwhile, the saas-bahu looked regal and ethereal in traditional attires. Nita dressed in custom tulle ‘Burano’ ghagra looked stunning. The dress is inspired by ventian lace whereas the masterpiece is all hand-embroidered with gold and silver sari, naqshi, sequins and crystals. Also, the elegant look is complimented with crystal mesh blouse and lavishly embroidered gold tissue dupatta. Check out here.

In addition to this, ahead of wedding ceremony, the Ambanis held a grand pre-wedding bash that was attended by many famous celebs from Bollywood. To name the few were Shah Rukh Khan, Shahid Kapoor and Mira Rajput to Abhishek Bachchan and Aishwarya Rai Bachchan amongst other celebrities.

Also Read: Ambanis, The Richest Family In Asia, Live In $1B Skycrapper Mension