13 Oscar Winning Comedies You Must Watch

The 92nd Oscar Awards are set to take place in February 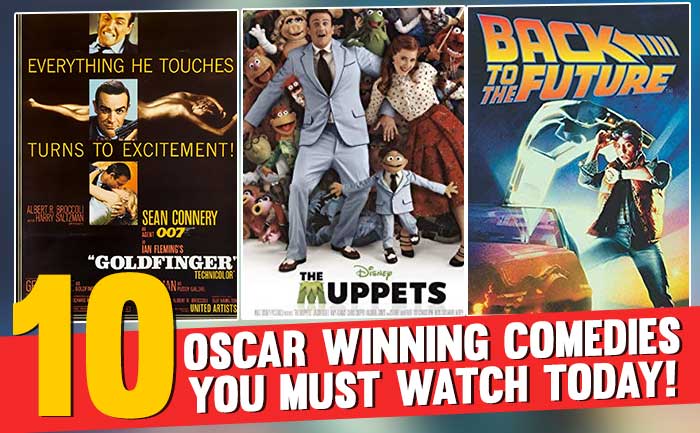 The 92nd annual Academy Awards, that celebrate the best in films of the past year, are set to take place on February 9. With Joaquin Phoenix’s The Joker leading with 11 nominations, this year’s Oscars are sure to be a memorable event.
As we wait with bated breath for the results, let us relax and kick back with some of the comedic gold that has been recognized at the Oscars in past years. While the Oscars have been more preferential towards serious fares when handing out Oscar nominations, there have been a few light-hearted movies that made the critics sit up and take notice. Here are the 13 best Oscar winning comedy films you must watch.

Released in 1964, Goldfinger was the fastest grossing movie in cinema history at the time. It even entered into the Guinness Book of World Records for that accomplishment.

Starring Sean Connery, Honor Blackman and Gert Frobe in title roles, this James Bond affair might not be an out and out comedy but it had some pretty hilarious moments that had the audiences rolling with laughter.

Sales for the Aston Martin DB5 skyrocketed after the release of this movie. The car also gained the nickname ‘The Most Famous Car in the World’. Maybe not be the best reputation for a spy car. Bond movies have a major contribution to car sales. The Spy Who Loved Me, which released in 1977, also gave rise to the sales of the Lotus Esprit.  Norman Wanstall received the Best Sound Editing Oscar in 1965 for Goldfinger.

The drama-comedy Descendants came out in 2011. Shot in the picturesque Oahu and the Island of Kauai, the film follows the story of Matt King, portrayed by George Clooney.

The Descendants won an Oscar for the Best Adapted Screenplay as well as two Golden Globe Awards for Best Picture: Drama and Best Actor: Drama for George Clooney.

Midnight in Paris opened the 2011 Cannes Film Festival. According to actor Tom Hiddleston, he received a letter from Woody Allen, along with 15 pages of the script, offering him the role of F. Scott Fitzgerald. Hiddleston still has the letter framed and hanging in his home office.

Midnight in Paris won the Best Original Screenplay in 2012.

Released in 2011, The Artist paid homage to movies of the 1920s. The movie was first shot in color and then converted to black and white. Shot in just 35 days, the movie pays homage to iconic films like Citizen Kane and 7th Heaven. The film won seven Academy Awards which included Best Film, Best Actor, Best Original Screenplay, Cinematography, Costume Design, and Original Score.

Incredibly, all the dance sequences in the movies were performed by the actors themselves. In fact, Jean Dujardin and Bérénice Bejo rehearsed the final dance sequence for five months in the same studio that Debbie Reynolds and Gene Kelly used to rehearse for Singin’ in the Rain.

It’s incredible to think that a film starring Kermit the Frog ever made it to the Oscars but The Muppets ended up bagging the Best Original Song Oscar for ‘Man or Muppet’.

Courtney Love, the widow of Nirvana frontman Kurt Cobain accused The Muppets of destroying Cobain’s Legacy by covering “Smells Like Teen Spirit” as a barbershop quartet. Nirvana members Krist Novoselic and Dave Grohl loved the song though. Dave Grohl even had a cameo in the film.

Mary Poppins was the brainchild of P.L. Travers and she rejected Disney’s attempts to acquire the story for twenty years before giving in! She regretted giving up the rights to Disney, even when the film went on to win 5 Oscars in 1965.
Julie Andrews ended up as the Best Actress in a leading role while Cotton Warburton was awarded for the Best film editing. The film also won the Best Effects, Best Original Song, and Best Score Awards.

While we love Emily Blunt’s sassy new Mary Poppins, there’s just something about the nostalgic charisma of the original that we can’t get over.

7. Back to the Future

Setting the bar for every time travel movie ever made, Back to the Future was a concept that was loved universally. Former president of the United States Ronald Reagan loved the movie so much he quoted the famous line referencing him in his 1986 State of the Union address. Interestingly, the film was almost called “Space Man From Pluto”.

Ford reportedly offered Universal $40,000 to change the iconic DeLorean to a Ford Mustang.

Pixar’s UP is a heart-warming movie that received the Best Achievement in Music Written for Motion Pictures, Original Score and the Best Animated Feature Film of the Year. In true Pixar fashion, the movie has a lot of Easter eggs. One of them is the tree Carl and Ellie picnic under. Did you know that it was the same from 1998’s A Bug’s Life?

That’s not all. Dug’s point pose is also a direct reference to Mickey’s dog, Pluto. The Grape soda pin that Carl wears is the same one that features in the Buzz Lightyear commercial in 1995’s Toy Story.

In addition to the Easter eggs, the movie also had plenty of tear-jerker moments. The married life sequence at the opening had the production team members in tears.

Juno was the coming of age story that won hearts at the Oscars. It also won the Best Writing, Original Screenplay award for Diablo Cody. J.K. Simmons was so impressed with the film that he was ready to take on the role of the teacher with no dialogues just to be in the movie. Even Jennifer Garner dropped her A-list salary to be a part of the small budget film. Green Day member Billie Joe Armstrong paid a tribute to the movie when he wrote the song “East Jesus Nowhere” referencing Bren’s line.

Life is Beautiful was a commercial success earning more than $225 million internationally. However, Mel Brooks has criticized the film for making jokes about the concentration camps. This movie has Robert Benigni’s sole Oscar-nominated performance.

The film has three Oscar wins with the Best Actor in a Leading, Best Music, Original Dramatic Score, and Best Foreign Language Film. Life is Beautiful marks the second time an actor has directed himself in an Academy Award-winning performance. Laurence Olivier was the first with Hamlet in 1948.

This 2010 drama rom-com centers around Oliver who is reflecting on the life and death of his father Hal. Written and directed by Mike Mills, Beginners is a heart touching story about a man trying to come to terms with seeing his father in a whole new light. The film is the real-life story of director Mike Mills who’s father revealed his secrets at the age of 75.

The film premiered at the 2010 Toronto International Film Festival. Christopher Plummer won numerous awards for this romantic comedy film including winning at the 2011 Oscar Awards for Best Supporting Actor. The film is rated R for strong language and some sexual content.

Men in Black was the surprise hit of 1997. Directed by Barry Sonnenfeld and adapted from The Men in Black comic books, the film had a lot of false starts before it finally got off the ground. John Landis declined the chance to direct the film, commenting it was “The Blue Brothers with aliens.” Clint Eastwood also turned down the offer to play the role of Kay. Tommy Lee Jones only agreed to the role after Steven Spielberg assured him that the script would improve. Similarly, Will Smith wanted to reject the role after reading the script. However, his wife Jada Pinkett Smith convinced him to accept the part.

The Oscar winning comedy was first going to be shot in Kansas, Washington, and Nevada but Barry Sonnenfeld decided to base the film in New York instead. The director thought it would be more convincing that aliens are hiding out in a large city with a tolerance for odd behavior.

The sunglasses used by Will Smith and Tommy Lee Jones are the Ray-Ban ‘Predator 2’. The sale of these glasses tripled after the release of Men in Black.

The commercial success also ended up winning the Oscar for Best Makeup.

Beetlejuice was released in March 1988. Michael Keaton claims it is one of his favorite films that he has acted in. The studio originally considered calling the film ‘House Ghosts’ and even considered ‘Scared Sheetless’ which was suggested by Tim Burton as a joke. The director was apparently horrified at the suggestion.

Michael Keaton once admitted that he had ad-libbed a lot during the movie. Despite being the main lead, the actor only appears in the film for 17.5 minutes. The movie’s unprecedented success led to talks of a sequel. Beetlejuice Goes Hawaiian was planned with both Michael Keaton and Winona Ryder signing up. However, Tim Burton lost interest in the project and it was shelved. Burton went on to direct Batman (1989) and Batman Returns (1992).