Trailer For PM Modi’s Biopic Is Out, Netizens troll Vivek Oberoi with most hilarious memes 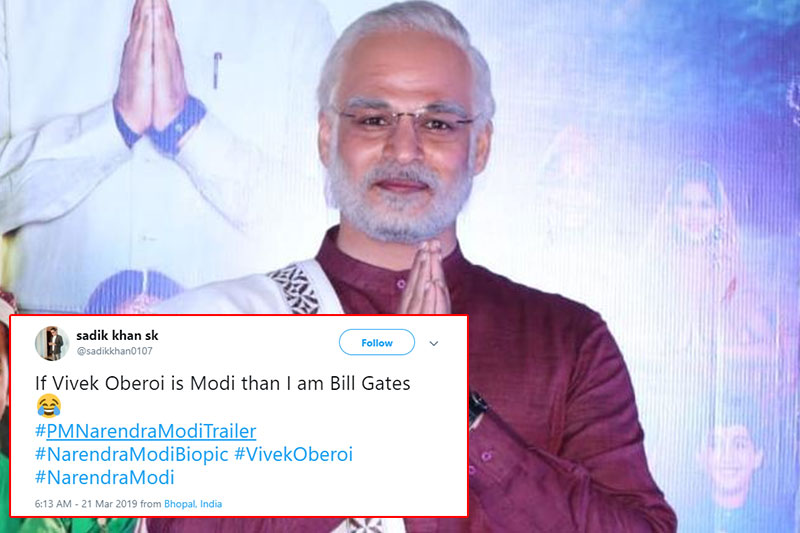 Ahead of Lok Sabha elections, the biopics on politicians are raining. One of them is a biopic on Prime Minister Narendra Modi titled as ‘PM Narendra Modi’. Recently, the makers released a trailer of the much-awaited biopic. Produced by Suresh Oberoi and Sandip Ssingh, the film will be released in 23 languages on 12th April, just some days before the Lok Sabha elections.

In the trailer, we can see actor Vivek Oberoi as PM Modi, is under several prosthetic, depicting a poised but determined Prime Minister Narendra Modi. We also got a glimpse into the various stages of PM Modi’s life, starting from his early childhood and chronicling up to the present years in his life, when he is one of the greatest leaders in the world.

Take a look at the trailer:

As soon as the trailer was launched, Twitter reactions started to flow in. Netizens started mocking Vivek Oberoi. Have a look at the tweets:

Me after my crush posts "Save the date" pics#PMNarendraModiTrailer pic.twitter.com/eyGLbZ2nZu

#PMNarendraModiTrailer has done more harm to BJP then any other combined together!

#PMNarendraModiTrailer
Shahjahan to the Labourers, when they asked for Payment.. pic.twitter.com/6nwXKC0hLV

What a horrible trailer of PM Narendra Modi. When you use all the best dialouges of the movie in the trailer and they all suck. #PMNarendraModiTrailer #VivekOberoi

Mr. Omung Kumar should be banned from making biopics. First he reduced the spectacular life battle of the legend Mary Kom into a melodrama and now this!!! #PMNarendraModiTrailer

Everything is wrong with #PMNarendraModiTrailer , starting from it's name. Why is movie named PM Narendra Modi and not Chowkidar Narendra Modi?

I really like @narendramodi but still after watching #PMNarendraModiTrailer. The first question pop-up in my mind – WHY WHY WHY & Who created this shit. LMAO#PMNarendraModi