Prabhas, Kriti Sanon, Saif Ali Khan and Sunny Singh starrer Adipurush is one of the most anticipated film. The film has been in buzz ever since the makers announced about its inception. Its an upcoming Indian mythological film, based on the Hindu epic Ramayana. Prabhas and Saif will be seen locking horns on the screen for the first time. However, the duo in real life share a warm bond of friendship. Darling fame has now treated his co-star with a container full of delicious Biryani. The picture is sure to make your mouth watery.

Its a known fact that Prabhas is an absolute Biryani lover. He never fails to treat his co-stars and crew members with container full of Biryani. The handsome hunk recently treated Saif and Kareena with the delicious dish. Touched by Prabhas’ sweet gesture, Bebo took to her Instagram stories to share the picture of the Biryani. She thanked the actor for sending over scrumptious food items. The picture sees a container full of Biryani, Raita, Salad alongside a few other dishes. She captioned it as, “When Baahubali sends you biryani, it’s gotta be the best. Thank you @actorprabhas for this insane meal, followed by a red heart emoji. #Adipurush.” 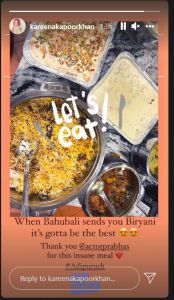 Earlier Prabhas had treated his Saaho co-star, Shraddha Kapoor with the Biryani. When the star was shooting for his then upcoming film, Baahubali, he was seen cooking this delicious dish with director, SS Rajamouli and co-stars Anushka Shetty, Rana Daggubati alongside others on their cheat meal days. Time and again, the actor has expressed his love for Biryani. He makes sure to treat his co-stars and crew with scrumptious food.

Talking about their upcoming film, Adipurush is being helmed by Om Raut directorial. Reportedly, the makers aim to release this flick by 2022. The film will target a pan-India audience and it will be released in several different languages like Hindi, Telugu, Tamil, Malayalam, Kannada.