Priyanka Chopra Gets Brutally Trolled For Smoking on Yacht, Trolls Call Her Hypocrite 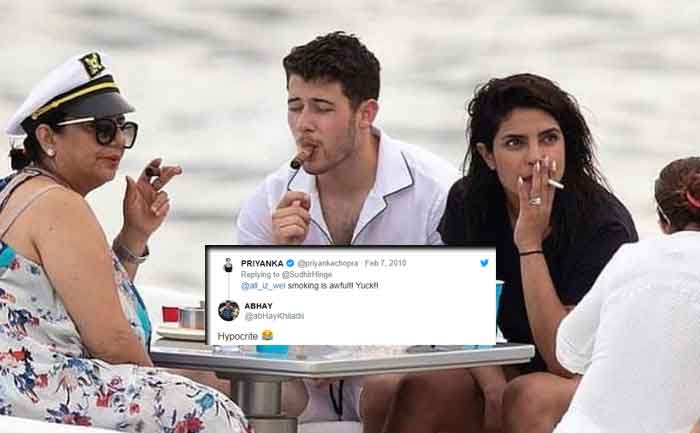 Priyanka Chopra, who recently celebrated her 37th birthday is currently holidaying in Miami along with her husband Nick Jonas, mother Madhu Chopra and sister Parineeti Chopra. There are several pictures of Priyanka Chopra from Miami doing the rounds on social media but what caught everyone’s attention is the photo of Quantico star smoking a Cigarette on Yacht.

As soon as netizens noticed Priyanka Chopra smoking on Yacht, they started trolling her for the same. In the picture, Priyanka is seen smoking a Cigarette while her mom and hubby are seen enjoying cigars.

You must be wondering why people trolled Priyanka Chopra for smoking a Cigarette. Let us tell you, in 2018, Priyanka had released a video, urging people to not burst crackers on Diwali. In the same video clip, she revealed, “Please meri saans ko berok rakhiye. Diwali pe patakho ko skip kijiye.” She added that the festival should be about “lights and laddoos and love, and not pollution”.

People on the microblogging site also dug out her old tweet from 2010 in which PeeCee said, “Smoking is awful!!! Yuck!!!”

This is not the first time Priyanka was slammed, She was also trolled for the grand fireworks display after her Christian wedding with Nick Jonas last year. People on Twitter called her a hypocrite and asked what happened to her asthma and concern for the environment when she lit fireworks to celebrate her own special day.

The Quantico star had earlier tweeted an ad campaign in which she revealed that she was diagnosed with asthma when she just five years old. She wrote that it could not hold her back from making her dreams come true.

Those who know me well know that I'm an asthmatic. I mean, what’s to hide? I knew that I had to control my asthma before it controlled me. As long as I’ve got my inhaler, asthma can’t stop me from achieving my goals & living a #BerokZindagi.

“Those who know me well know that I’m an asthmatic. I mean, what’s to hide? I knew that I had to control my asthma before it controlled me. As long as I’ve got my inhaler, asthma can’t stop me from achieving my goals and living a ‘Berok Zindagi’,” she tweeted.