Megastar Rajinikanth takes his Lamborghini Urus for a spin

Megastar Rajinikanth sets internet on fire with his lockdown car ride; Guess where he went 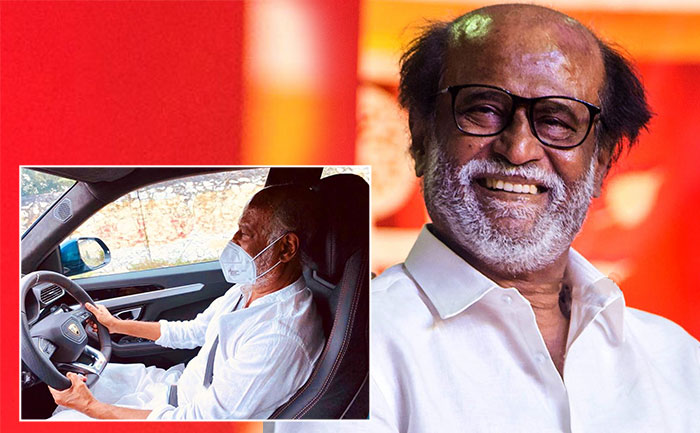 Megastar Rajinikanth is trending on social media today. The Darbar star is the only actor who can do this without being involved in any controversy. The Darbar star won hearts with his swag amid the lockdown, when he was spotted taking his Lamborghini Urus for a spin.

On Monday the legendary actor took his car out for a drive. He was seen not only driving the car but also taking all precautions of wearing a mask. The picture created a buzz on the internet and fans soon trended it under the hashtag #LioninLamborghini. Not many know that Thalaivar’s passion is cars and he seldom uses the services of a driver. He prefers maneuvering his cars himself and going on long drives around the city.

Check out the viral pic shared by fans here:

There is another picture of the megastar that is trending on Twitter. In it, he is seen with his daughter Soundarya, her husband and son.

Thalaivar #Superstar @rajinikanth with his daughter @soundaryaarajni family. The #Lamborghini #Urus model car seen in the picture is the car which Thalaivar drove (The pic we saw yesterday). Very happy to see #Thalaivar smiling and happy. #ThalaivarForLife
#Rajinikanth #RBSI pic.twitter.com/mCtMSSmomH

Reportedly the Thalaivar drove his grandson Vedanth, daughter Soundarya and son in law Vishakan to his farmhouse in Kelambakkam to relax there for a while.

On the work front, Rajinikanth’s next film Annaatthe is scheduled to release during Pongal 2021. After Petta and Darbar, this would be Rajinikanth’s third consecutive release on Pongal. Annaatthe also stars Khushbu, Meena, Prakash Raj, Nayanthara, Keerthy Suresh, Sathish and Soori.