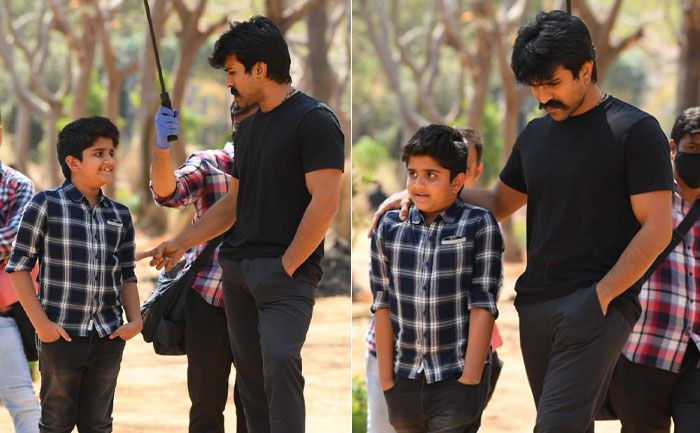 SS Rajamouli’s upcoming period drama RRR is the next big thing in Indian Cinema. The Epic Saga is still in the making stage as 30% of the shoot is still pending. The shooting of the film was stopped due to the spread of COVID 19 in India. Now with the state government relaxing the lockdown rules, Ram Charan and the team have kick-started the shoot in Hyderabad. Young Tiger Jr NTR has also joined the sets of upcoming much-hyped multilingual dramas.

Leaked pictures of Ram Charan from the sets are creating a buzz on social media. In the now-viral pictures, Ram Charan is seen sporting a black t-shirt along with black trousers, and sports shoes. He is also sporting a new hairstyle with a thick handlebar moustache.

.SS Rajamouli is planning to shoot a lavish song with more than 3500 junior artists and dancers. The song will be filmed on a huge set in Hyderabad itself. Both the actors Mega Powerstar RC and junior NTR aka Tarak will be attending this song shooting.

RRR is set against the backdrop of the pre-independence era. The movie revolves around the journey of Komaram Bheem, played by Jr NTR and Alluri Sitarama Raju, portrayed by RRam Charan. Shriya Saran will be seen in an extended cameo. Bollywood stars Ajay Devgn and Alia Bhatt are also playing pivotal roles in the film.

RRR is set to hit the theatres on 13th October.