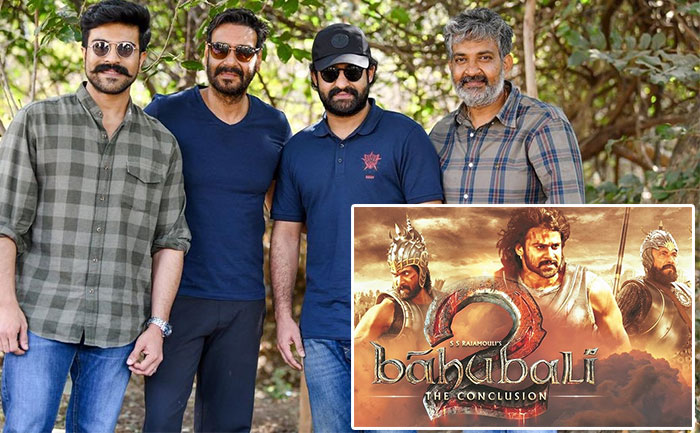 With Baahubali, director SS Rajamouli did the unthinkable breaking records not just in his homefront but also nationally and eventually internationally! So much so, that the film still stands on top after all the while and many releases later. And now, as the director is working on his upcoming film RRR the anticipation is higher than has ever been seen in Indian cinema. Surely with the massive cast and crew in place and the name of Rajamouli in the forefront, expectations are high!

In fact, the breaking of records has already begun! The film’s theatrical rights have registered big numbers all over south India, breaking all previous records yet again.

While the AP and Telangana regions have collectively recorded Rs 215 crores (Nizam – 75cr, Andhra – 100cr and Ceded – 40cr) at this point, Karnataka rights have been sold for 50cr and Kerala rights for 15cr while the Tamilnadu rights are in talks! But that’s not it, the overseas rights have been bought for a massive 70 crores. With all this, RRR is the first film that would easily do the pre-release business of more than 400 Crores from South India and Overseas alone.

Having said this, the RRR has already shattered the pre-release business of Baahubali 2 with a huge margin. It is also said that the makers are eyeing on big numbers in the North India market too as the director had already made his mark with Baahubali 2, currently the biggest blockbuster of Hindi Cinema.

It looks like new records will be written for sure the next time around with RRR but the industry is going to have to look for new ways to register these numbers. RRR will be released on the 8th of January 2021 in 10 Indian languages.

Also Read: Its official! Ram Charan and Jr NTR starrer RRR will release on this date