Salman Khan has now lent his voice for the ‘Yu Karke’ song from his upcoming movie ‘Dabangg 3’. Salman Khan has once again proved that he is not only a talented actor but a superb singer as well. Salman Khan — who recorded multiple songs for his films such as Kick and Hero — has now given his amazing voice again for the ‘Yu Karke’ song from his upcoming movie ‘Dabangg 3’.

Dabangg 3’s new song titled ‘Yu Karke’ released today and Chulbul Pandey and Rajjo’s unmissable chemistry is being widely loved by their fans. The Bharat actor sung the song along with Payal Dev.

This is not the first time Salman has crooned song for his movie. Ealier he lent his voice for songs like, ‘Hangover’ (‘Kick’) and ‘Jag Ghoomeya’ (‘Sultan’), ‘Main Taare’ (Notebook) which were loved by his fans. He also sang the title track of his production ventures, ‘Hero’, starring Aditya Pancholi’s son Sooraj and Suniel Shetty‘s daughter Athiya.

As soon as Salman released the song, his fans went crazy and started appreciating Bhai for his soulful voice.

Have a look at the comments here. 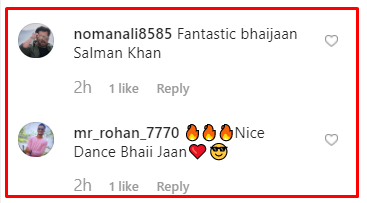 Composed by the music duo of Sajid-Wajid, Penned by Danish Sabri and sung by Salman Khan and Payal Dev, Yu Karke seems to be a perfect peppy songs.

Well, with the video of ‘Yu Karke’ out now, we surely are grooving to the interesting hook step of Chulbul Pandey where Vaibhavi Merchant has definitely given us another rocking, ‘bindass’ and fun number with Dabangg 3.

Directed by Prabhudeva and produced by Salma Khan, Arbaaz Khan and Nikhil Dwivedi under the banner of Salman Khan Films, the much awaited movie and is slated to release on 20th December, this year.