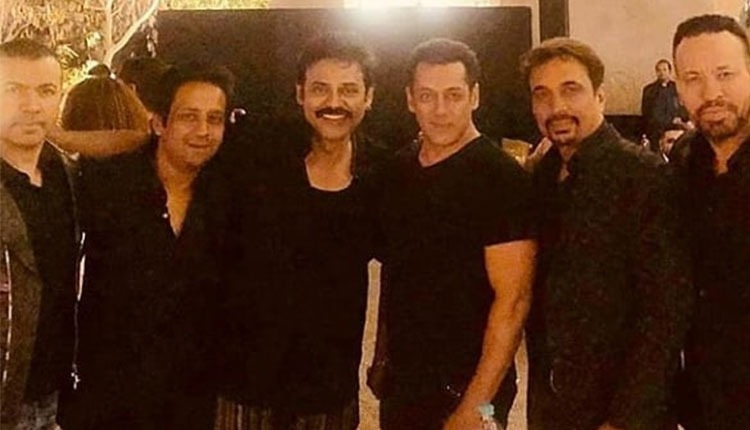 It is a known fact that Tollywood star Venkatesh Daggubati and Bollywood’s bhaijaan Salman Khan are very close friends. Recently, Venkatesh’s daughter Aashritha got married in Jaipur and the wedding was graced by Salman Khan. The ‘Dabangg’ actor was seen spending quality time with Venkatesh. The two superstars also danced all night at the party and their video is now going viral on social media.

In the video, we can see Venkatesh and Salman Khan dancing to the song ‘Jumme Ki Raat Hain’ from the later’s ‘Kick’. The film was one of the chartbusters of Bollywood in recent times. Rana Daggubati also joined Venkatesh and Salman and shook his leg with the stars on the stage. Take a look at the video:

It is to be noted that Salman Khan and Venkatesh are good friends and often meet whenever they are either in Mumbai or Hyderabad. Also, both the stars are passionate about cricket and have participated in Celebrity Cricket League which is conducted every year.

Talking about the Venkatesh’s daughter wedding, Aashritha tied the knot with Vinayak Reddy after dating for more than three years. The couple got engaged in February this year before getting married in Jaipur couple of days ago.

The wedding was attended by close friends and family members like Ram Charan, Upasana Kamineni, Naga Chaitanya, Samantha Akkineni, Sumanth, Sushanth and many others. Their pictures are also going viral on social media. Check out few of them right here:

And another happily ever after ❤️