Samantha and Naga Chaitanya broke million hearts after announcing about their separation on social media. The actress has changed her names on social media platforms all over again Samantha and Naga Chaitanya broke million hearts with the announcement of their separation on social media. The two of them got married after dating each other for a few years. Both of them are known for ruling the social media trends with their pictures and updates. After they jointly announced the separation, their fans have been eagerly waiting to know the reason behind the separation. However, they did not reveal anything. Recently, Samantha changed her name on Twitter and Instagram over again.

Speculations rose to buzz about nothing being well between Naga Chaitanya and Samantha after she dropped her in-law’s surname from her social media accounts. After marrying Chaitanya, she had changed her social media account names to Samantha Akkineni. However, few months ago she changed it to letter S, thereby removing the surname amidst surging speculations on their separation. On Oct 2, 2021 she announced the separation on social media with a lengthy cryptic note. Post the official announcement she changed the name again to Samantha. 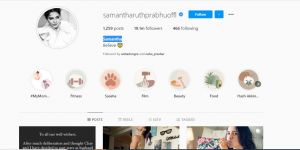 For the unversed, Samantha and Naga Chaitanya will be soon divorced by mutual consent. As per the media reports, Samantha was offered Rs. 200 crore as alimony. The actress has not officially confirmed anything about the same.

On the work fronts, Samantha’s last release was The Family Man 2 wherein she portrayed the role of Rajalekshmi Sekharan aka Raji. With this web series she marked her debut in negative roles. Her upcoming films include Shakuntalam and Kaathu Vaakula Rendu Kaadhal. Talking about Chaitanya, he recently released Love Story alongside Sai Pallavi. He has been gearing up to mark his debut in Bollywood with Aamir Khan starrer Laal Singh Chaddha.