Mahesh Babu's Sarileru Nekevvaru & Allu Arjun's Ala Vaikunthapuramulo will be released on January 11 and January 12 respectively. 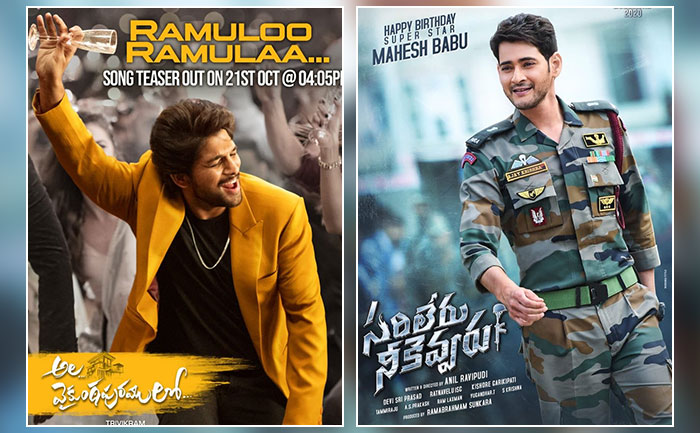 Makers of Mahesh Babu and Allu Arjun starrer Sarileru Neekevvaru and Ala Vaikunthapuramulo seem to have settled their release date issues amicably. Yes, earlier there were reports claiming that Allu Arjun is not happy with Mahesh Babu as their movies were directly clashing on January 10, 2020. However, the makers have come up with a solution and now there movies would not clash directly on January 10.

According to latest reports, Mahesh Babu’s Sarileru Neekevvaru will hit the theaters on January 11, 2020 and Allu Arjun’s Ala Vaikunthapuramulo will release on January 12. Earlier, both the stars wanted their movies to be released on January 10.

The issue came to light when Allu Arjun’s movie did not get the sufficient number of theaters. And that’s the reason why Allu Arjun wanted his movie to be released on January 10. But, the makers of Sarileru Neekevvaru also wished to release their movie on the same date.

The final solution came when Producers’ Guild intervened. On January 4, 2020, DIl Raju conducted a press conference and announced that both the movies will release as usual and a sufficient number of theaters were allocated to both the movies.

Besides these movies, yet another movie is all set to hit theaters this week and it is Rajinikanth’s Darbar. Yes, Darbar is scheduled to release on January 9, 2020.